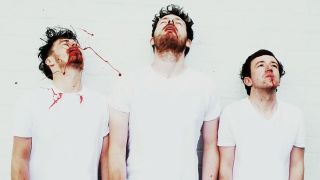 North Wales alt.rockers GRAVVES are set to release their new EP, Oh, The Joy, via Loner Noise Records on April 27, but you can listen to it in full on Louder right now.

The follow up to 2017's debut EP Rattle, Oh, The Joy distils the fury and promise of that record into six songs and 20 minutes of glorious, punk-infused grunge rock.

On the record, bassist/vocalist Adam Hughes told Louder: "After we released our first EP, Rattle, we just had fun playing gigs and jamming the occasional song. So, bit by bit, things just came together. We didn't even know we would be doing an EP; we took some time thinking about the best way to get our stuff out there. We thought we would just do singles at one point, then we considered an album. After taking a bit of advice, this made the most sense. We can see that now – it's tricky for bands to make these decisions on our level, especially when you've put so much effort, time and money into it. You just want it to have the biggest impact.

"The EP's about steamrolling through tough times and seeing things for what they are. We're not a very serious band – you can tell that from the lyrics and videos we do – but it's not totally silly either. We're cautiously cynical.

"We recorded most of the video for Hello Sailor whilst we were recording. Outside of the studio, there's a clip with Dave in gym shorts, T-shirt, headband... he looked absolutely ridiculous. In this clip, he spins a hula hoop in his arm then lets go. In the video you see it flying off into the distance and he runs after it. What you don't see is where it ended up: a mechanics garage. He popped in, grabbed it, ran out. We were nearly crying with laughter.

"We want as many people to hear this album as possible, and hopefully enjoy it. If people can listen, bang their head, move to it, laugh at it, have fun to it, be weird, then our job's done."

You can hear the EP in full below.

Check out GRAVVES on tour at one of the dates below: