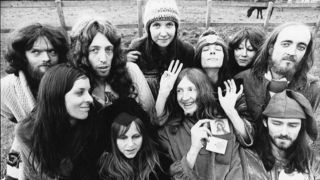 Gong have announced a new 13-disc box set to be released in September. Love From Planet Gong - The Virgin Years 1973-1975 has been curated by guitarist Steve Hillage and mixed by bassist Mike Howlett and remastered from original Virgin masters by original Gong trilogy engineer Simon Heyworth. Over 70% of the new set is of rare and previously unreleased recordings.

Released with the full involvement of original members and to coincide with Gong’s 50th Anniversary, the set covers the band’s classic years in a package that includes: their seminal first four Virgin studio albums plus bonus tracks; previously unreleased, multi-tracked full gigs, the complete John Peel Sessions from 1973 and 1974; previously unreleased quad Pye and Westlake mixes of You re-formatted to 5.1 surround-sound, and artwork including rare and previously unseen work by the late Daevid Allen.

* 1CD of full gig at the renowned free concert in Hyde Park, London in 1974

* 2 tracks recorded at the Edinburgh Festival in 1973

* Includes the previously unreleased quadrophonic Pye and Westlake Studio mixes of You.

• Notes by Gong archivist Jonny Greene of the Gong Appreciation Society and artwork including rare and previously unseen art work by Daevid Allen.