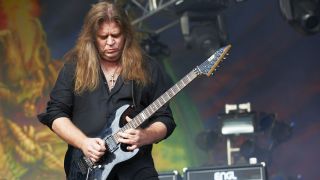 Former Dio guitarist Goldy and ex-Quiet Riot frontman Mark Huff revealed earlier this year they were putting together a new group and they have now revealed guitarist/keyboard player Findlay as the latest addition.

Goldy says: “I wanted to put the ‘holy shit’ factor back into the hard rock/heavy metal genre by getting virtuosos in their own right together in one band that not only look the part, but are also unusually and vastly talented and who are good human beings – and we can all agree on producing high-quality music together.”

Goldy recently released two songs written in honour of the late Ronnie James Dio. Huff contributed lead vocals to Hole In My Heart and Dark Rainbow, which were made available for purchase from Goldy’s website.