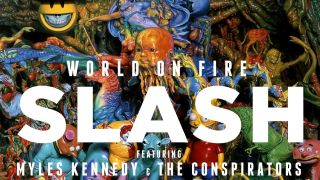 Classic Rock magazine will release World On Fire, the new album from Slash with Myles Kennedy & The Conspirators, as a special Fanpack edition on September 15, a full four weeks ahead of the album’s regular release date.

The album, the follow-up to 2010’s Slash and 2012’s Apocalyptic Love (Featuring Myles Kennedy & The Conspirators) — both of which were released with Classic Rock in Fan Pack form – features 17 new songs and has been described by Slash’s bassist Todd Kerns as “sleazier, tougher and more dangerous” than its predecessors.

Classic Rock’s Slash Fan Pack includes the World On Fire album, a metal pin badge plus an in-depth, 116 page full-colour magazine dedicated to every aspect of how the album was written and recorded. The magazine will feature exclusive new interviews with Slash, Myles Kennedy, the band members, the album’s producer Michael Baskette and Slash and Myles’ full track by-track breakdown of the new release.

The magazine also includes an exclusive photo shoot for Classic Rock Presents… featuring Slash’s favourite new guitars plus exclusive fly-on-the-wall pics from inside the studio, competitions and much more.

Plus If you pre-order via myfavouritemagazines.co.uk/slash before 12pm (GMT) on Monday 11 August you will receive an exclusive personalised giant poster featuring your name.

The tracklisting for World On Fire is as follows: