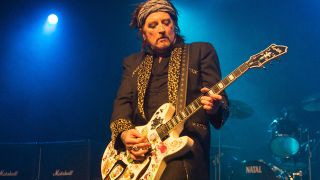 The album will ship on CD and vinyl later this year – but those who pre-order it now will automatically receive an instant digital download of the 10-track record.

Ginger says: “Writing music is a form of therapy for me. It keeps my mind occupied and ensures that I live in the moment.

“This album is a collection of songs written while walking my dog Maggie on early mornings with very few people around and tons of ideas not suited to either The Wildhearts or my more rootsy solo albums.

“I figured if this album merely pays for itself, through a modest amount being actually available, then my work was worth it, and I subsequently will try to release one of these mixed packages every year.

“As of now, before anyone has heard this grab-bag of brain zaps, I have no idea if people are going to love this collection of musical mutts or hate it.

“My work here is done for now. Next stop, your ears. Wish me luck.”

Earlier this month, The Wildhearts announced they’d release the mini-album Diagnosis in October through Graphite Records.

The six-track record will be released as a limited edition 10-inch white vinyl with pale blue powder splatter, on regular black vinyl 10-inch, on CD and on digital platforms.

All three physical formats will feature an inner gatefold comic strip illustrated by the award-winning Hunt Emerson, who last worked with the band on the Earth Vs The Wildhearts cover and their logo.