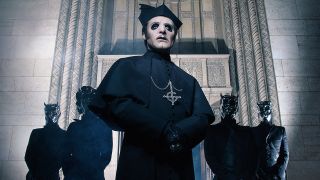 Ghost’s new album, Prequelle, looks set to give them a Top 10 album in the UK and America.

Hits Daily Double reports that Prequelle is likely to enter the US Billboard charts at No.3, having sold between 49,000 and 54,000 copies. The band’s previous studio album, 2015’s Meliora, reached No.8 in the US.

Prequelle is also sitting at No.6 in the UK midweek album charts. Meliora previously reached No.23 in Britain.

Ghost were forced to cut short a show in Milwaukee earlier this month after a fan collapsed and died during their set.

Jeffrey Fortune, 52, was taken ill at the Riverside Theater during an intermission in the band’s show. He was later pronounced dead at hospital.

Ghost fanclub Ghost American Ministries launched a GoFundMe page to raise money for his family. The total currently stands at over $9000, more than nine times the original target.