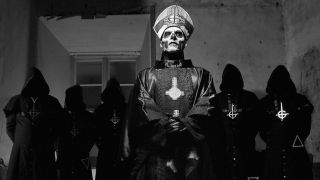 Ghost will return with their third album in the summer – featuring ‘new frontman’ Papa Emeritus III, the band have suggested.

He’s said to be the three-month-younger brother of outgoing leader Papa Emeritus II, who appeared on 2013’s Infestissumam.

But it’s thought the secretive outfit, who have never officially confirmed their identities, remain fronted by their co-founding singer.

Sweden Rock Magazine reports (via Blabbermouth) that a single taken from Ghost’s third record will be launched ahead of their appearance at the Sweden Rock Festival on June 4. The show will be their first with Emeritus III.

Last year one of the band’s Nameless Ghouls predicted their lifetime would be limited, saying they’d be “rational enough to feel when the curtain is falling,” but added that he hoped they’d make “at least two records” before the end.