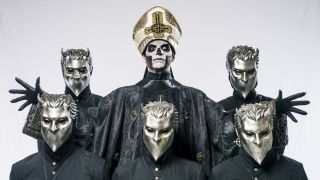 Ghost have been forced to postpone their show in Philadelphia next month because Pope Francis is visiting the city the same day.

They planned to go ahead with the concert at the city’s Union Transfer on September 26, but with heavy security measures in place and a lock-down on public transport, Papa Emeritus and co have decided to move the gig.

A statement from the band reads: “We wish to inform you that due to Frankie’s visit next month in Philadelphia, we received a letter informing us that Ghost fans would not be able to use public transportation or park their cars near Union Transfer.

“In hopes to ensure that each and every Ghost fan can attend this show, we have decided to move the Philadelphia concert at Union Transfer to Tuesday, September 29.”

Before then, they’ll play a series of acoustic shows in US record shops starting next week in support of third album Meliora – out on August 21 via Spinefarm Records. They’ll return to Europe in November.