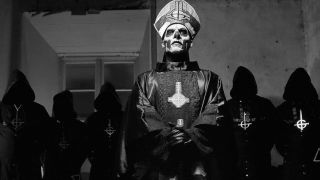 One of the Nameless Ghouls of Ghost says he understands why other acts are tempted to keep going long after they should have split – but insists his band won’t make the same mistake.

Members have previously discussed the longevity of the band, and the concept of whether to continue making music once their identities have been revealed. They were recently the subject of an online petition to force them to quit.

“If you’ve been in a semi-successful band you don’t want to start working at a gas station.”

He says the situation can cause problems for bands who may remain more relevant: “You have a very dense field where everybody has to co-exist. You come into a city and just that week there’s five concerts. That’s bad for everybody.”

It’s one of the reasons Ghost won’t keep going after their sell-by date: “We’re rational enough to feel when the curtain is falling, that we have nothing more to offer — what we’re doing is just a repeat,” he says.

Speculating on when that might happen, he adds: “I hope, considering where our plans are, at least two records.”

In the meantime, though, the Ghoul insists: “We have so many more things on the list that we need to do to regard this as complete. Even now, we’re doing just a third of all the things that we set up five years ago.”