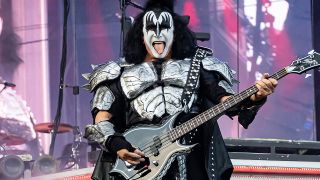 Kiss vocalist and bassist Gene Simmons featured in the summer edition of Metal Hammer magazine, where he chatted about the band, their epic End Of The Road tour and more.

Among a series of questions from fans, was one asking Simmons what his plans were once he hangs up his dragon boots for the very last time.

He replied: “I have quite a few other businesses. We have a cannabis company that’s Invictus MD, we have restaurants called Rock & Brews and I am a partner in one of the largest automotive companies, International Automotive Components.

“We also have a Kiss Monster Mini Golf course in the Rio All-Suite Hotel in Las Vegas, a Kiss limo service, Kiss cruises, all kinds of stuff.

“That’s going to take up time, but Kiss will never stop, it’s just the touring band that’s stopping. I think we’re doing the ethical thing which is getting off the stage before it gets too late – now is the right time.

“You and I have both seen bands that should have been off the stage 10 years ago.”

He adds: “I strongly feel we’re putting on the best tour ever and it’s fair to say we’re the hardest-working band in show business.

“We all love Mick Jagger and Bono but if those guys wore my seven-inch dragon boots and 20 pounds of armour, they would pass out in half an hour.”

Kiss will continue their End Of The Road tour across the US from February, a run of shows that will include special guest David Lee Roth.

Find a list of all Kiss' End Of The Road dates here.