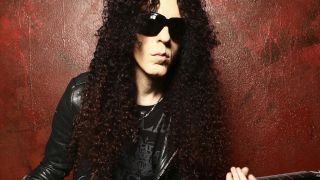 Former Megadeth guitarist Marty Friedman says he’d perform with his old band again if given the chance – but only because the fans would love it.

He left Megadeth in 2000 after recording five albums and moved to Japan in 2003 where he’s built a successful career as a TV personality.

And the guitarist admits he hadn’t given much thought to what he achieved with Dave Mustaine and co until he was promoting his 2014 album Inferno.

Friedman tells the Metal Brainiac: “For the longest time it was the farthest thing from my mind. Then I started to really get a grip on what people think of Megadeth’s stuff that I did.

“I hadn’t forgotten about it but I really had no idea the kind of impact and the enthusiasm that the fans of that era have. I’d never really seen it with my eyes because I got sidetracked in Japan – I was oblivious.

He continues: “As much as I don’t really like to go back and redo something that I’ve already done, I would still consider something like an event with Megadeth because the fans would love it; for no other reason than that.”

He says he’d only consider the move if the situation was handled in a professional manner. “The thing has to be conceptually great, the staff has to be fantastic, and it has to be done proper in every possible way,” he says. “When that day happens, I’ll be happy to listen to an offer.

“I’m still in great friendship with everybody in the band so it could happen. But it’s certainly not at the top of the list.”

Megadeth mainman Dave Mustaine revealed that Kiko Loureiro is the first guitarist since Friedman that has left him feeling “intimidated” in the studio.

Friedman will launch his first tour of North America since 2003 next month as part of his world trek in support of Inferno.