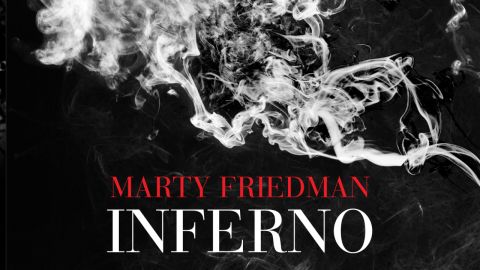 He may have one of the strangest picking techniques out there (what the hell is going on with that right hand?) but there’s no denying when Marty plays guitar, the world listens.

Inferno sees the ex-Megadeth gunslinger returning to heavier roots with an impressive cast of collaborators including Rodrigo y Gabriela, Alexi Laiho and Danko Jones spread across 50 minutes of instrumental and vocal-led tracks.

Of course, it’s Marty’s signature approach of contorting all the wrong notes into the right ones that makes this an invigorating listen. Bursts of chromatic insanity are added to Meat Hook courtesy of Shining (NOR) mischief-maker Jørgen Munkeby and his saxophone, who then trades licks with Marty over a halftime breakdown that screams pure Queen nostalgia.

Co-written by Jason Becker, Horror sees Marty reunited with the ex-Cacophony bandmate who became one of the most tragically inspiring figures of our world to create a neo-classical masterpiece.

There’s been a fair few solo efforts since his ’88 debut, but Inferno is the one to check out.