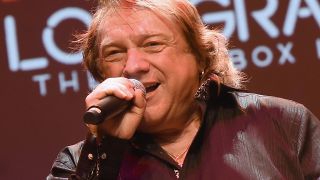 Former Foreigner frontman Lou Gramm has been hospitalised with “a severe respiratory infection, dehydration and fatigue.”

The vocalist had been due to appear with Foreigner on their Double Vision: Then & Now tour but has now had to withdraw after being admitted to hospital last week.

A statement reads: “Lou Gramm was hospitalised at the Unity Hospital at Park Ridge in Rochester, New York, last week with a severe respiratory infection, dehydration and fatigue.

“He had hoped to be ready to appear during the Double Vision: Then & Now tour, and some scheduled shows with Asia. Unfortunately, at his follow-up appointment, his doctor pronounced him unable to perform at these shows.

“The tour will go on with other original members as they join Mick Jones and the current lineup of Foreigner.”

Gramm says: “I’m very disappointed about not being able to perform at the Double Vision: Then & Now shows for all the fans.

“My doctor insists if I pushed myself to perform, I would be in big trouble. So doctor’s orders, I ride the bench. Rock on!"

Foreigner guitarist Jones adds: “We will all miss Lou at our upcoming shows and we join all his family, friends, and fans in wishing him a speedy recovery.”

Last week it was revealed that Foreigner would release Double Vision: Then And Now on CD/DVD, Blu-ray/CD, limited 2LP/Blu-ray and on digital and streaming platforms on November 15 through earMUSIC and marked the news with a trailer.

The package was recorded at the Soaring Eagle Casino & Resort, Mount Pleasant, Michigan, at the start of the North American leg of Foreigner's 40th anniversary tour in October 2017.

Foreigner: Double Vision - Then And Now
Foreigner's reunion with the majority of their former members in October 2017 has been captured in this new live package which will be released in November.View Deal