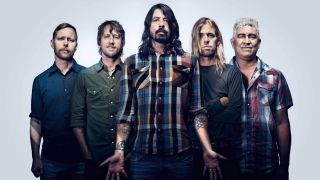 He broke his leg after taking a tumble during their performance in Gothenburg – then came back to finish the set from a chair while medical staff looked after his strapped-up injury.

They were forced to cancel their appearances at Pinkpop, Netherlands and St Gallen, Switzerland immediately after the incident. Now it’s been confirmed that the rest of the Foos’ tour dates, including shows in London, Edinburgh and their headline slot at Glastonbury, have been scrapped.

The band say in a statement: “Due to injuries sustained in Dave Grohl’s fall at Ullevi Stadium, Gothenburg, doctors have required the cancellation of the remainder of the band’s dates in the UK and Europe.

“After undergoing surgery Monday, Dave’s full recuperation time is still to be determined.”

The dates affected are: