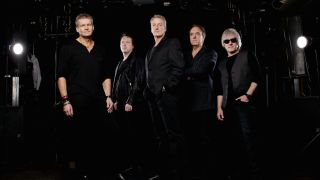 British melodic rockers FM have released details of Heroes and Villains, the follow-up to 2013’s Rockville and Rockville II pairing, and made new song You’re The Best Thing About Me available as a stream. The band have also announced a UK tour for May.

“I think we have managed to capture the best elements of what the band are about in 2015,” says frontman Steve Overland. “We had great fun making the record and we are all very proud of the finished result. There are big rock anthems in tracks like Diggin’ Up The Dirt and Fire and Rain, and many melodic songs with FM’s trademark hooks and vocal harmonies. There are also not one, but two ballads. One of these (Walking With Angels) is a stripped-down acoustic song, which is something a little different for us.”

The band’s drummer, Pete Jupp, adds, “After our shows in November the band was white hot and the creative juices were in full flow, so the writing and recording process for Heroes and Villains was a prolific and painless affair. We’re looking forward to getting back out on tour, straining at the leash.”

The first music from the Heroes and Villains to emerge is You’re The Best Thing About Me, described by guitarist Jim Kirkpatrick as, “a late contender for the album by Steve that the rest of band loved immediately. It’s a great driving song that harks back to some of FM’s earlier material.”

FM have also released an EPK featuring interviews with all the band members, footage from the forthcoming Digging Up The Dirt video, and clips of the band recording the album, which was self-produced before being mixed and mastered at Abbey Road Studios.

Tickets are on sale now. Heroes And Villains will be released on April 20.