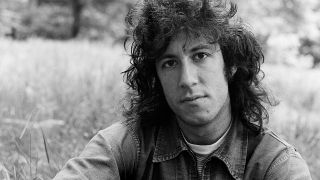 Solicitors acting on behalf of Green's family issued a statement confirming his death on Saturday. “It is with great sadness that the family of Peter Green announce his death this weekend, peacefully in his sleep.

"A further statement will be provided in the coming days”.

Green founded Fleetwood Mac with drummer Mick Fleetwood in 1967. Born in London’s East End in 1946, he was turned on to the possibilities of guitar at the age of 11, in the skiffle era of the mid-50s. After acquiring a cheap Spanish guitar from his brother, he went on to become one of British blues rock's most notable players.

Green retreated from the spotlight and was diagnosed with schizophrenia, but re-emerged at the end of the decade to embark on a low-key solo career, and hooked up with Mick Fleetwood again on the drummer's solo album The Visitor.

In the 1990s he formed the Peter Green Splinter Group, who released nine albums, before rounding off his professional career with Peter Green and Friends.

"Peter Green is, arguably, the most underrated guitarist of the British mid-60s blues boom, consistently relegated to a position somewhere below the holy triumvirate of Eric Clapton, Jeff Beck and Jimmy Page," we wrote earlier this year.

"He deserves better. He wrote some of the most memorable blues-based songs of the 60s, created some of the genre’s most imaginative guitar licks, and established a band that by the end of the decade was out-selling The Beatles and the Stones."

Tributes have been paid by Black Sabbath bassist Geezer Butler, who described Green as "one of the greats" and former Whitesnake guitarist Bernie Marsden, who wrote, "Peter Green - thank you for everything".

Peter Frampton wrote, "Most sadly have lost one of the most tasteful guitar players ever. I have always been a huge admirer of the great Peter Green. May he rest in peace."

Sad to hear of Peter Green passing- one of the greats. RIP. pic.twitter.com/OUHg3KwnNyJuly 25, 2020

Most sadly have lost one of the most tasteful guitar players ever I have always been a huge admirer of the great Peter Green may he rest in peace.July 25, 2020