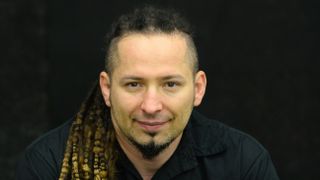 Five Finger Death Punch have changed their habits on the road to help frontman Ivan Moody battle “his demons.”

The vocalist has been struggling with substance abuse and guitarist Zoltan Bathory says the whole band made changes to help their colleague cope.

Bathory tells Metal Hammer: “You have to change the habits on the road – what happens, what’s on the rider. You have to take off all the alcohol – even mouthwash. It’s about trying to eliminate all of the triggers.

“He’s been battling his demons, and when you’re in a rock band, it can be really difficult to be on the road.

“If you have any kind of addiction or addictive personality, everybody wants to hang out and party. People are going to come up to you and say, ‘Hey man, let me buy you a drink,’ or ‘Let’s hang out.’ For them, that’s a big thing. They don’t realise that to us, it was the same thing yesterday, and the day before that, and the past 300 days before that.

“But you don’t want to be rude – it’s just hard for people to understand that.”

Bathory also discusses what direction 5FDP will take their sound on the follow-up to 2015’s Got Your Six.

He says: “Since we have six records, I think now is the time when technically we could do any kind of album. This is the moment where we can sort of experiment.

“We have a couple of ideas floating around. One of them is to make a little bit of a retro record, just to have fun and do a thrash metal vibe, and then there are new ideas that are completely different, involving elements that we’ve never had before.

“Both directions are exciting, so we’ll have to make a decision.”

The band appear at Reading and Leeds in August before a US tour starting in October.

Read the full 5FDP interview in issue 285 of Metal Hammer magazine, which is out now and also available via TeamRock+.