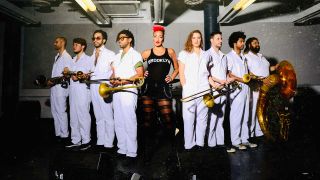 It shouldn't work, but it does. It really works.

Brass Against are a New York collective who play covers of classic songs by Rage Against The Machine, Audoslave, Tool and others, breathing new and vibrant life into the likes of Bullet In The Head and Lateralus.

They're no mere tribute band, as the two million YouTube views of their incendiary cover of Killing In The Name will attest. For a start, they're led by brass instruments, with trumpets and trombones providing a ferociously powerful backing to some equally powerful vocals. And then there's the politics. In an age when many artists sit on the fence for fear of alienating parts of their fanbase, Brass Against are avowedly political.

Ladies and Gentlemen, protest music is back.

"Around the time Trump started garnering support, I felt like we needed Rage Against the Machine more than ever," says band leader Brad Hammonds. "I wanted to do a show of some sort and something big to make a statement."

So he called baritone sax player Andy Gutauskas, and the two got together in a rehearsal space to run through some RATM tunes. "They all sounded amazing," says Hammonds. "We called other friends that we play with and did a video for Bombtrack. It resonated with folks and we kept going – and here we are!"

"Kept going" is something of an understatement. The band have gone from strength to strength, their covers becoming ever more powerful, while the addition of guest singers like the extraordinary Sophia Urista has brought added fire and fury to covers of Rage's Wake Up, Guerrilla Radio and Killing In The Name.

"I know when I listen to political inspired bands I get really energised, especially Rage," says Brad. "I felt so depressed when Trump was elected like so many others and wanted to do something besides simply expressing views on social media."

"I think a large portion of the mainstream bands that we see are more concerned about Instagram followers, product sales and keeping the networks happy," adds Andy. "I do think bands have a great opportunity to reach many people and help educate and inspire through their songs. When an artist is truly honest with their art, political or not, I think the result has the power to resonate with people and bring them to a higher level."

European fans will be able to experience this for themselves next year, when the band play a series of dates across the continent, including UK shows in Glasgow and London in late February (full dates below). They'll return to London in June to support Lenny Kravitz at the O2. Tickets are on sale now.

"I think its safe to say we'll bring an amazing show every night," says Brad. "Filled with Rage, Tool, Sabbath, Audioslave, Living Colour and more. We're so incredibly excited to take this thing to Europe!"

What is it about brass instruments that works so well when they play riffs more usually associated with guitar?

Brad: That’s been a fun challenge to figure out since we’ve started the band and something that I’m continually learning more and more about with each video. The songs we’ve covered so far have percussive and rhythmic guitar lines with big open power chords that lend themselves naturally to the brass family. I think when you have six brass players all in sync, relentlessly forcing air through their instruments trying to recreate one of Tom Morello’s blazing guitar lines, the end result is really powerful.

Andy: Music can make the mood and you never know when and how someone will be inspired by a song or a lyric, for better or for worse sometimes. For me, just revisiting these Rage songs on their own has been really inspiring to me as an artist; a prime example being my new motto pulled straight from Guerrilla Radio: “It has to start somewhere, it has to start sometime. What better place than here, what better time than now?” I don't know about you, but that makes me want to do something!

Do you see parallels between the America that elected Trump and Britain's choice on Brexit?

Brad: Absolutely. Conservatism is running rampant around the globe – its not just Trump. The idea that we can become isolationists isn’t pragmatic or just. Trump ran and is governing on nationalism, fear and hatred of ‘the other’ and we know how that turns out in the end from history.

Andy: I do. There has been a very long and calculated assault by the far right on progressive thinking and politics across Europe and the United States. Through fear mongering and a rise in nationalism we were divided and then cast against each other only to cater to our worst natures.

Have you had any reaction to what you do from Tom Morello and the RATM camp?

Brad: Tom re-tweeted our version of Wake Up and has liked a few of our other videos and Brad Wilk has commented cool things on instagram. Its mind-boggling that it even reached them and extremely validating. I had no idea how people let alone bands that we cover would feel about this project – but, it seems to really strike a chord.  We’re paying homage to these amazing bands and our hope is that we’re doing them justice and putting our own creativity behind it.

You've covered Pantera, a band whose singer has got into trouble for acts you wouldn't normally associate with the left – throwing a nazi salute onstage, wearing a Stop Black on Black Crime t-shirt, etc. I imagine you must have had a discussion about whether to cover Walk or not with that in mind. Did you have any doubts?

Brad: This is a tough one. I admit fault on this – the idea behind covering Walk was really 1. Pay homage to Dimebag and Vinnie – who recently passed away. 2. It was hugely requested and 3. Imagining it would sound great with the band. I hadn’t read the articles on Phil doing that shit. When we started getting comments and links to articles I thought about taking it down. It’s truly antithetical of what we’re about and feel. A few of us talked about it and agreed to keep it up for now. But, yeah, that was a mistake on my part for not doing simple research!

Any other covers in the pipeline?

Brad: Yes – we try and release a new video every three weeks. We’re going to keep doing Rage, Tool (and all things Maynard), Audioslave and have a list of a ton of bands on the docket. I don’t want to give any away!

Do you plan to add your own original material to the mix?

Brad: Yes – we all have original projects and that is the goal.  We throw around ideas all the time but want to make sure we nail it. I always find a ton of creativity on the road and can’t wait to be with the band for a month to flesh out ideas, try songs live and come home and record!

Andy: Yes! We’re always working on some new ideas or bouncing riffs back and forth. It’s been really fun playing our favourite songs of all time, and I’m excited to share our original music with the world and hope that it will have a similar impact as the covers.

Brass Against's debut album is available from the band's website. Tickets for all shows, including Lenny Kravitz at the O2, are on sale now.