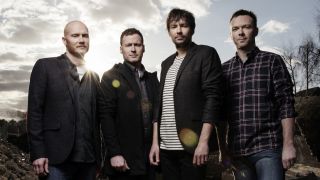 The new album from The Pineapple Thief is described in the new issue of Classic Rock as "exquisitely fragile", "rousing" and "heartbreaking", containing "perfectly formed packets of 21st century prog".

“People always ask me how we keep progressing after so many releases when so many artists can’t get past their ‘difficult second album’”, founder Bruce Soord tells Classic Rock. “Well, it’s easy when you start from a very low base. For a long time this was a DIY operation and albums were released on the smallest of independent labels. After each album and tour we would learn and grow. This album represents the culmination of all that; everything we had earned. We found ourselves with the money, the know how and the personnel. No excuses. This is the best album we have ever made.

“While it contains 12 relatively concise songs I am still very much a fan of the ‘album’ format. Magnolia is designed to be listened to as a journey and believe me, it treads some very different sonic paths before culminating with ‘Bond’. It should reveal itself to you a little more on each subsequent listen. That’s the real benchmark of quality for me.”

Magnolia is released on September 15 via Kscope