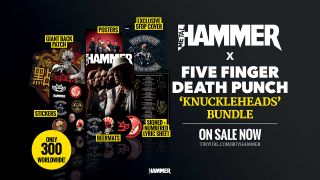 Metal Hammer has teamed up with Five Finger Death Punch for this world exclusive ‘Knuckleheads’ bundle!

The bundle includes a hand-signed and numbered lyric sheet, a huge, exclusive back patch and an exclusive cover – plus four beer mats, a poster and sticker sheet. Only 300 are available worldwide, so get yours now!

The issue includes our exclusive interview with Five Finger Death Punch, in the studio ahead of their forthcoming album and arena tour.

Also included in the issue: We look at the 20 moments that defined the decade, featuring Slipknot, Nightwish, Architects, Iron Maiden, Babymetal and more.

We also head back in time to Slayer’s first ever UK tour, take a trip to 1969 with Ghost’s Tobias Forge, get on the frontlines of the fight against fascism in the black metal scene with Dawn Ray’d and delve inside the reinvention of Schammasch.

So don't miss out – grab yours now!