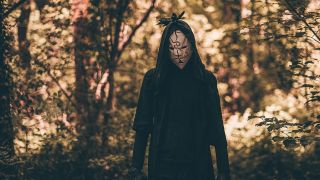 The anonymous collective known as Sleep Token are premiering their new video for Calcutta exclusively with Metal Hammer. Taken from their upcoming EP Two, it’s an odd and unique mix of technical metal and expansive indie soundscapes. But that’s not the only bizarre thing going on…

Fronted by the masked, secretive figure known as Vessel, Sleep Token worship and commit themselves to the ancient deity known as Sleep (although we have been told “no proper translation can cover it”).

To try and gain some kind of grasp on what Sleep Token are and who is behind the mask, we had a quick chat with the person known as Vessel to try and find out…

What is the story behind Sleep Token?

“How we got here is as irrelevant as who we are – what matters is the music and the message. We are here to serve Sleep and project His message.”

Who is Sleep? How did an ancient deity find himself in the UK music scene?

“He is everywhere, at all times. Vessel encountered Sleep in a dream, with promise of glory and magnificence if Vessel followed Him. The UK is old, centuries of lore lay buried here. This land has power, if only you knew how to use it.”

What is the meaning behind the markings on your mask?

“It is an acronym of Sleep Token and reads as ST in ancient runes.”

Why do you all wish to remain anonymous?

“Our identities are unimportant. Music is marketed on who is or isn’t in a band; it’s pushed. prodded and moulded into something it isn’t. Vessel endeavours to keep the focus on His offerings.”

Do you worry people will liken you to bands like Ghost?

“No. The only comparison that can be drawn with Ghost is our anonymity. Our verses are a token, crafted to magnify and embody the multitude of emotion that writhes in our subconscious. Sonically our voice is rooted in the resonation between the notes and your emotion. Take our hand.”

Your Facebook page proudly states ‘Nothing lasts forever’. Is Sleep Token a temporary vehicle for the persona known as Sleep?

“Life is fleeting and this too shall pass. But for now, we praise Him.”

What are your influences musically?

“As musicians we are inspired by the human condition and a plethora of artists, but we are deeply moved by His words and continue to do our utmost to bring them to life. As followers we are bound by a duty to combine our crafts to create music that conveys some of our most primal, and powerful emotions.”

The song Calcutta is a bizarre mix of mainstream anthemic indie and tech-metal. What on earth is going on there?

“Life is dark. Life is bright. Life is ugly. Life is beautiful. Don’t get lost in genres, they’ll only disorientate you. Music is for everyone.”

Do you think people will see Sleep Token as a gimmick and not pay attention to the music?

“The standard concept of gimmickry is none of our concern. We are here to deliver a message; touch people in their hearts and subconscious minds. Soon, regardless of cynicism, you will all be followers. “

You’re making your live debut next month. What can we expect from Sleep Token in the live environment?

What lies in the future for Sleep Token?

Sleep Token’s upcoming EP Two will be released on July 21, via Basick Records. They make their live debut at the Black Heart in London on June 17.