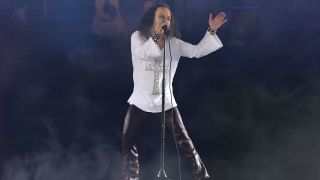 Wendy Dio says she, along with the Eyellusion team who are behind the Ronnie James Dio hologram tour, are currently tweaking the visuals before it heads out on the road again.

The hologram of the late rock and metal icon was unveiled at Wacken Open Air in 2016, with a run of Dio Returns live dates following across Europe in December last year.

Now Dio’s widow Wendy says the tour is likely to hit North America in the future – but before it does, some changes will have to be made.

She tells The Metal Voice: “We took the hologram tour out in Europe to see if there was a market for it, because this is all very new. It’s new technology and a lot of people are naysayers – some think it’s good, some think it’s bad.

“It was very well received. Kids were crying to me and saying, ‘Thank you so much for bringing Ronnie back to us.’ I think it was great for people that have seen Ronnie before and wanted to see him back on stage and for kids that never got the opportunity to see Ronnie.”

She continues: “It was a good test, we did very well, but there’s things I need to perfect on Ronnie. I’m really very critical. I need to perfect his face a little bit more – his eyes and his eyebrows are not quite right.

“So it’s back on the drawing board right now and we’re hoping it will go out again probably at the beginning of next year, and we will hit Canada and America. But it has to be right first.”

Dio also responds to those who disagree with the tour and says: “All the criticism is fine. Everybody has the right to criticise, but look at it and see it first before you criticise it.

“Most of the people that criticise it haven’t seen it and they don’t even know what to expect. It’s a whole experience that we take out.”

Ronnie James Dio died of stomach cancer in 2010, with the fourth annual Ride For Ronnie event set to take place on May 6 in California. Find out more.

Why the Dio hologram is just the beginning... and who's coming up next