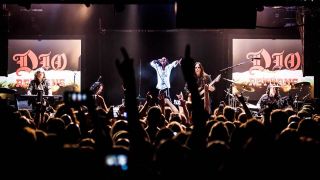 The Dio holgram, onstage in London (Image credit: Will Ireland)

This Night of the Living Dead fantasy is not some macabre future episode of Black Mirror. Thanks to advances in hologram technology, all of the posthumous comebacks listed above are not just possible but increasingly likely. Digital 3D doppelgangers have been creeping into concert halls for more than a decade now. Holographic simulations of Madonna and Gorillaz performed together at the Grammy awards in 2006. A hologram of rapper Tupac Shakur grabbed global headlines with his Coachella Festival appearance in 2012. A computer regenerated Michael Jackson moonwalked onstage at the 2014 Grammys. Many more are in gestation, from Abba to Zappa, Roy Orbison to Lemmy.

But way out in front of this technological revolution is the late Ronnie James Dio. A holographic replicant of the legendary frontman, who died in 2010, made a sensational live debut in front of 70,000 surprised fans at Wacken Open Air festival in 2016. A European tour followed late last year under the name Dio Returns, featuring Dio’s long-serving band alongside guest singers Oni Logan and Tim “Ripper” Owens, breaking new ground as the first ever live hologram rock show to go on the road. A more extensive world tour is planned for later this year.

The Dio Returns show in London, at the mid-sized Islington Academy, was a packed and warmly received affair. The set-list spanned Dio’s Black Sabbath, Rainbow and solo years with classic anthems like Heaven and Hell, Catch the Rainbow and Straight Through the Heart. Synchronised to vocals lifted from vintage live recordings, the Dio hologram was a distracting gimmick at first, a white-smocked phantom that seemed to hover behind the band, his gestures limited and repetitive, his not-quite-human features invoking the eerie effect that computer animation designers call the “uncanny valley”. But after a few numbers the alienating oddness faded and Digital Dio began to feel like just another visual effect in the modern rock-show toolbox. Though clearly still a work in progress, the latent potential is undeniable.

Fan reaction to the Dio hologram has inevitably been mixed, but Dio’s widow Wendy insists the new show is true to her late husband’s spirit. “We need to keep Ronnie’s music alive,” she argues. “Ronnie tried desperately to make a hologram way back in 1986. Anyone who saw that Sacred Heart tour saw the crystal ball with Ronnie’s head in there, which was done with rear projection, but he was trying to make a hologram. He was always very enthralled by Disneyland and the holograms there. So I think he would give this his blessing.”

To create the Dio Returns show, Wendy partnered with Eyellusion, an LA-based hologram company with links to Hollywood digital effects pioneers George Lucas and James Cameron. Wendy admits she initially had reservations about the project, but is now closely involved on the creative team. “I spent forever on his eyes and eyebrows because they weren’t right,” she laughs. “I’m always very critical. This is not perfect in my eyes. We need to make it perfect.”

Dio’s band also had early doubts about sharing a stage with a digital ghost. “The first time I saw it was a little weird,” admits drummer Simon Wright. “But you have to understand, when Ronnie was alive, he was always into the latest technology. So in that respect he would understand what we’re doing, I think. We’re doing it for his fans, and Wendy is involved, so it’s basically a way to celebrate Ronnie.”

Guitarist Craig Godly agrees. “It’s all entertainment at the end of the day, that’s how I ended up thinking about it,” he shrugs. “I miss Ronnie, I think about him every day. This is a hologram, it’s not him, but it’s just a celebration of him.”

To be accurate, neither Dio Returns nor any of the other recent holographic pop resurrections have been true 3D holograms. All use variations on a surprisingly antique stage effect known as “Pepper’s Ghost”, an optical illusion created by reflecting a 2D image onto an angled screen. This visual magic trick was first perfected in 1862 by scientist John Henry Pepper for a stage production of the Charles Dickens spine-chillier The Haunted Man. “It’s an old concept that’s been tweaked and tweaked,” nods Eyellusion CEO Jeff Pezzuti. “And we are going to tweak some more, we’re not going to stay still.”

Enhancing Victorian stagecraft with 21st century tools like video mapping and motion-capture technology, the Dio Returns show features a staggering 80,000 frames of computer-generated footage projected onto an invisible porous screen mounted at a sloping angle behind the band. “That footage you see never happened,” explains Pezzuti, who tours with the band and a three-person technical team. “It’s a completely new performance. We use all the videos and photos available to try and capture the essence of Ronnie, but we don’t use any of it out onstage.”

Inevitably, some media commentators and die-hard fans have criticised the idea of reanimating Dio from beyond the grave. Some have dismissed it as a tacky novelty, other as a shameless cash-in. “A hologram might be able to replicate his best screams, it can’t make you feel like you’re one of Dio’s own,” one rock writer protested. “Cashing in on your emotions so shamelessly isn’t what he was about.”

Financial concerns are clearly one factor driving holographic performance technology. As revenue from recorded music plummets, the growing zombie army of digitally regenerated rockers is only going to expand. As Pezzuti explains, the Dio Returns tour is designed to save him from becoming a “footnote” in rock history. “Ronnie James Dio is an incredible singer and should be validated that way,” he insists. “This whole process has put him back at the forefront of the industry.”

But Wendy Dio splutters at accusations that the Dio Returns project is a cash-in, pointing out that the investment sunk into the hologram technology will take several years just to break even. “The first one we did at Wacken, just one song, cost over two million dollars,” she says. “This tour has cost less, even though there are more songs, because technology has moved on and there are more people doing it. It will become cost effective for people to do, but right now we are the innovators. We’re investing in the future.”

“What I tell people is, you can criticise all you want, but come to the show first!” argues Pezzuti. “At least know what you’re talking about, don’t criticise off the concept. I want these fans to understand it comes from a place in the heart. I’m a massive Dio fan to start with.”

Dio’s band members concede that any new technological change, from CDs to mobile phones to digital downloads, always meets initial resistance. “There are always people who will rage against change, it’s very disturbing to a lot of people,” nods keyboard player Scott Warren. “This is a dramatic new revolution in technology. We are at the forefront of that, and fortunate to be placed there because of Ronnie’s legacy. Who better suited to be at that frontier than Ronnie James Dio? I think the doubters will adjust to the idea over time. It’s like future shock.

Pezzuti admits the Dio Returns Euro-tour in late 2017 was like an experimental road test. Glitches will be ironed out, software upgraded for the upcoming world tour. “I critique and tweak every night,” he says. “This is the first leg, the next leg is going to be even better from all aspects: technology, visual content and overall staging.”

The Dio Returns show has also served a test case for other musical trustees who may want to resurrect a famous family member to perform their back catalogue live again. Eyellusion are already working on a stage show fronted by a Frank Zappa hologram, despite the added complication of navigating deep rifts between Zappa’s children Ahmet, Diva and Dweezil. One of the pre-announced guest players, guitarist Adrian Belew, has already dropped out of the summer tour dates, branding the project “caustic and divisive”.

Besides Zappa, Eyellusion are also in discussion to digitally regenerate other much-missed artists including the metal overlord himself, Lemmy. “The timing just has to be right for that, we don’t want to go too early,” says Pezzuti. “But it would be so massive to put Ronnie and Lemmy back out on the road together again.”

Where Dio are breaking new ground, others will soon follow. Live holograms of pop diva Whitney Houston and rapper Notorious BIG are reportedly in development. In April, meanwhile, veteran Manchester-based concert promoter Danny Betesh will bring a holographic version of Roy Orbison to the UK for an extensive arena tour backed by a full orchestra. Betesh, fresh from seeing the first pre-tour showcase in New York, believes this technology will prove a boon to old-time artists and their fans.

“I actually promoted some shows with Roy in the Sixties,” Betesh say. “It really is lifelike, and very much as I remember Roy. This is exciting and interesting because it’s the first time you’ve had something like this in venues of this size. I can see this expanding, you’ll probably get quite a number of these shows. Where you’ve got artists that have this great catalogue of songs, and obviously Roy had a lot of fans, people still want to go and see him and hear those songs again.”

Betesh suggests that holographic shows will fully never replace live human performers, but could still grab major market share as an alternative option. And of course, as this technology evolves, there is no reason why it should remain limited to resurrecting dead artists alone. Where demand remains high but veteran performers can no longer face the stress of touring, holograms could fill a gap in the market as the ultimate tribute act. Indeed, TV talent-show tycoon Simon Cowell is currently developing 3D “digital avatars” of the very-much-alive Swedish pop titans ABBA for a world tour next year, backed by a full live band.

“It’s perfect, we can be on stage while I’m home walking the dogs,” ABBA’s Benny Andersson told Australia’s Herald Sun newspaper. “If this really works there’ll be a lot of artists wanting to do the same thing, even artists who are still young and still touring.”

Jeff Pezzuti believes “a million per cent” that fully-rounded 3D hologram performers will soon replace the current Pepper’s Ghost simulations. This is one reason why Eyellusion created their digital Dio footage in a super hi-resolution 5K format that can more easily be adapted for AR (augmented reality) and VR (virtual reality) in the future. Pezzuti also sees plenty of potential for holographic shows by living artists, including “de-aged” versions of legendary bands like the Rolling Stones, Iron Maiden or Fleetwood Mac performing their early classic albums.

In a quick straw poll of the Dio band for fantasy future hologram candidates, David Bowie, Freddie Mercury, Jimi Hendrix, Jim Morrison and Jon Lord inevitably lead the pack. Once this technology takes off, of course, all of these and more will be possible. Imagine the ultimate classic rock supergroup jamming together, forever.

“I’m sure Freddie Mercury is going to be inevitable,” says Scott Warren. “And I guess John Lennon, the Beatles. McCartney and Ringo could play along with their mates, or with themselves when they were younger. And Mozart! I’d like to see Mozart on stage…”

From classical maestros to classic rock legends, don’t fear the digital reaper. Death is no longer an obstacle to a healthy touring career. For those about to virtually rock, we salute you.