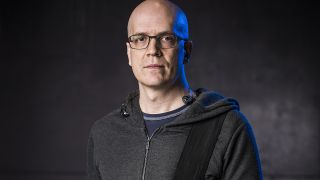 Devin Townsend has heaped praise on Chad Kroeger, after the Nickelback leader contributed to his new album Empath.

The record launched back in March through InsideOut Music, with the album also featuring appearances by artists including Steve Vai, Anneke Van Giersbergen, Ché Aimee Dorval and Ryan Dhale.

But it’s Kroeger who Townsend singles out in a new interview with Consequence Of Sound.

He says: “We met by chance and ended up forming a friendly acquaintance. One thing that I would say about Chad that I think will eventually be known about him, is that he is a functioning genius, in my estimation.

“I think that people don’t realise how clever that guy is. And his success in a lot of ways, I believe – although what he’s writing is coming from a place of what he wants to write – I think is his ability to analyse the public and musical structures, and the ways that people react emotionally on a commercial level is such that he is almost more like a scientist than he is a rock musician.”

Townsend goes on to say that it was a “godsend” for him to work with Kroeger as it allowed him “to make decisions on Empath that I don’t know if I would have made had I not made his acquaintance.”

Townsend will head out on tour across Europe with special guests Haken later this year.