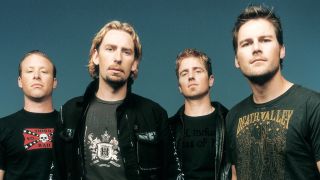 It all started with an argument. And, inevitably, that argument was between Nickelback frontman Chad Kroeger and the girlfriend with whom he lived in Vancouver. As the dispute reached boiling point, Chad stormed down to the rehearsal room in his basement, where he attempted to pinpoint why their relationship hurt so much. Deep down, he knew he loved his girlfriend. He realised, too, that living with the frontman of a struggling rock’n’roll band couldn’t be easy. At the same time, however, he wanted to let her know that enough was enough. It was this curious cocktail of emotions that shaped the song How You Remind Me.

“I was sitting in the basement of my old house in 2000,” Kroeger recalls, “having just got into a big argument with my girlfriend. So I guess I was feeling pretty jaded at the time. I wanted to write some lyrics that were a slap in the face to her. Even though I do say in the song that I love her, I kinda wanted to throw her a back-handed slap. So I was being very direct, and yelling into the microphone so that she could hear what I was saying.

“I was shouting lines like ‘It’s not like you to say sorry’ and ‘This is how you remind me’,” he recalls, “and I was trying to be nasty, trying to put in these really sarcastic lines. Then she opened the door, and she was like: ‘What’s that? I really like it’. So it kinda defeated the object of what I was doing.

“We actually talked about it years later, and I told her I wrote the song about her, and she would not believe that she was the How You Remind Me girl.”

Before How You Remind Me was released in 2001. Nickelback were more perspiration than inspiration. Having relocated to Vancouver from the remote Canadian farming town of Hanna, the band had released two unremarkable albums [1996’s _Curb and 2000’s The State_], and pushed them to moderate sales via a punishing tour schedule. Nickelback’s work ethic and live prowess was impressive, but their albums had yet to infiltrate suburbia.

“We had probably sold about half-a-million records,” Kroeger recalls. “This one was going to be the make or break album for us. Silver Side Up was gonna either come out and tank, or it would be a decent handshake to the world. It was really gonna show people if we were gonna be around for a while or not.”

Guitarist Ryan Peake also realised they were facing death or glory. “You get one real shot, and I think our label gave us one-and-a-half shots,” he admits. “Because they’d sunk so much money into us for our previous album, they were just like, this has to work, or we’re gonna be fucked.”

How You Remind Me was recorded in Vancouver. Alongside Kroeger and Peake were Chad’s brother Mike on bass, Ryan Vikedal on drums, and producer Rick Parashar controlling the ebb and flow of the atmospherics. It was a decent song, the band felt, but lacked something in terms of dynamics.

Peake had already suggested a series of ‘stops’ to give the chorus more impact. But the defining moment in the song’s genesis came from drum technician Andrew Mawhinney.

Kroeger: “The big climax of the song at the third chorus, when there’s a stop and I sing ‘for handing you a heart worth breaking’, that was our drum tech’s idea. He was like ‘you guys should do a big stop there.’ We already had those ‘I’ve been wrong/I’ve been down’ lines where we were stopping, but we needed the third chorus to do something special. We paid him $5,000 for that – for one suggestion!”

Like many big hit singles, How You Remind Me was nearly buried as just an album track.

“We almost went with Never Again for the first single,” Kroeger says, “just cos we thought it was really powerful, and maybe we were afraid to show the other side of Nickelback.”

Peake wasn’t convinced either: “Almost every band, when they put an album out, hopes certain songs will be heard on the radio. But we never had that conviction.”

But How You Remind Me was heard. And bought – by enough people to send it to No.1 in Canada and the US, and to keep it in the UK top five for weeks. After nearly 10 years of toil, Nickelback were finally an overnight success.

Kroeger maintains that he wasn’t trying to write for the masses, he was just being honest. “Before How You Remind Me, I was hiding behind metaphors, I wasn’t saying what I wanted to say. And I think when the honesty came out people appreciated it.” And he hasn’t tired of playing it. “You have to maintain perspective,” he offers.

“You have to realise that you’re not the first band to have a song like this. As soon as I get sick of playing How You Remind Me, Mick Jagger should walk up to me and slap me in the face and say: ‘Hey! When you’ve played Start Me Up as many times as I have, then you can bitch.”

In Praise Of... Chad Kroeger