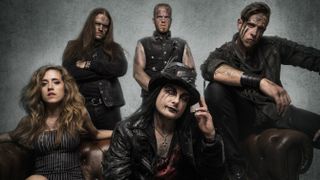 Devilment II: The Mephisto Waltzes will be released on November 18 via Nuclear Blast Records, with the Cradle Of Filth vocalist previously reporting it was sounding like a “fucked-up Manson meets Rob Zombie.”

And in a new video with Filth and keyboardist and singer Lauren Francis, he reveals more information on the follow-up to Devilment’s 2014 debut album The Great And Secret Show.

“In the end, it was an amalgamation of the fact I really like Danzig and he named his albums I, II, III etc, but Danzig II was a particular favourite, so I thought Devilment II was quite cool.

“Misfits did a song called Mephisto Waltz, so that seemed like a great fit.”

The cover was created by Elena Vizerskaya, with Filth reporting that he wanted to use her artwork for the cover of Cradle Of Filth’s 2012 album The Manticore And Other Horrors but says it didn’t happen due to a spat with their label.

Filth adds: “Originally, Elena’s work was going to go towards The Manticore And Other Horrors but there was a bad dispute at the time and we ended up using someone in-house and it was terrible. It was fortunate for us that the opportunity arose to use this amazing artist.”

Devilment will head out on a UK tour in December in support of The Mephisto Waltzes. They recently released a lyric video for album track Under The Thunder. Listen to it below.

Meanwhile, Cradle Of Filth have been working on the follow-up to 2014’s Hammer Of The Witches which will have a “Victorian horror” theme.