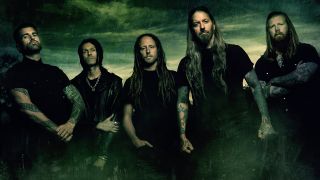 The first part of what is described as a “double album saga” is titled Dealing With Demons Vol. 1, and it’ll launch on October 9 through Napalm Records.

The record will be the band’s first since 2016’s Trust No One and is said to represent “the onset of a final purging of the demons that have long haunted frontman Dez Fafara and Devildriver’s music.”

To mark the album news, the band have released a lyric video for the first single, Keep Away From Me which was inspired by the coronavirus pandemic.

Fafara says: “I’ve been social distancing since I was born. I’ve learned to try and embrace my agoraphobia all my life. This is what the lyrics are about as we are all sheltered in place. They seem very clear.

“Now is not the time bands should shy away from the obvious, by trying to push the narrative through their art as if everything is all right with the world and ‘it’s metal video visual as usual time,’ as it is clearly not that time.

“We as artists should speak up, inspire and change lives, or paint a picture – a time capsule if you will – by the narrative we push in uncertain times.

“This video is one such art piece as my band and thousands of others are forced into quarantine – cannot rehearse, take photos, or perform – to make a music video for the very people that have supported us for years.”

Fafara adds: “It’s trying times for the world and my outlook through this video is simply this: Here’s what we are going through as a family on this planet and as we embrace what is yet to come, please stand together.”

As for the second part of the album project, Fafara says: “Volume two will get into some very heavy topics as well. You’ll see the band progress even further musically as we finish this ode to the purge of all things demonic.”

Dealing With Demons Vol.1 is will be available to pre-order from Napalm Records online store in a variety of bundles, including vinyl in various colours, picture discs, cassette, skateboards, notebooks, clothing and more.

Devildriver: Dealing With Demons Vol. 1
1. Keep Away From Me
2. Vengeance Is Clear
3. Nest Of Vipers
4. Iona
5. Wishing
6. You Give Me A Reason To Drink (feat. Simon Blade Fafara)
7. Witches
8. Dealing With Demons
9. The Damned Don't Cry
10. Scars Me Forever

Devildriver: Dealing With Demons Vol. 1
Devildriver are back with their first all-new album since 2016's Trust No One. The first of a planned two volume release features the lead single Keep Away From Me.View Deal