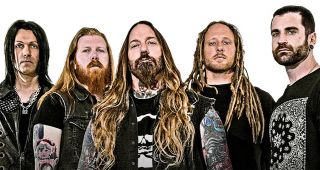 He’s powered by weed, believes in the power of karma and isn’t afraid to fuck someone up. Don’t stare down our Dez…

HAVE YOU EVER HAD A FIGHT WITH A FELLOW MUSICIAN?

“Most definitely. It panned out in my favour. Or not… I’m not sure. It’s actually on the Devildriver DVD [You May Know Us From The Stage, 2011]. Mike [Spreitzer, guitarist] and I got into it in France one night and I ended up throwing a wine bottle at his head.”

HOW DID THAT TURN OUT?

“We’re like brothers now, and he’s obviously still in the band and other guys are not. So I guess it did work out in my favour. But sometimes you’ve just got to tell people, ‘Don’t fuck with me anymore!’ I’m 5ft 7, but I become 6ft 5 immediately if you push me too far.”

“When weed was highly illegal, I got busted with a lot of it. There was a time in Hollywood, California, for about eight or nine years when if you smoked weed it was probably mine. So I did my share of time, for sure. It’s no place you want to be. But as a kid I couldn’t stay on the right side of the law. I had a really rough background and avery violent childhood. I ran away from home at 15 and I was always a street kid and a hustler. I had
to make my ends meet somehow, and that’s how Idid it. I had agangster mentality at avery young age. But I ended up going to jail for it and it was not fucking cool. Luckily, I was in there long enoughto change my mind on which route I was going in life.”

“Marijuana; right now and every fucking moment of my life. I’ve suffered from ADD and ADHD my whole life, and as soon as I found weed I started focusing more. It’s an artistic thing with me, too. Every song I’ve ever written I’ve been high, and every song I’ve ever recorded I’ve been high as fuck. And I believe in its power to treat illness. I watched my mum beat cancer, and she would never have survived without marijuana. I’ve watched the medicinal qualities of what they call a drug be absolutely life-saving. So I’m a strong proponent of marijuana. When people hear the word ‘weed’ they think of stoners sitting around and not going to work, but they’re wrong. I run two bands, I have abeer line, a wine line, a surf company [Sun Cult], a wife and three boys, and if you think I’m sitting on the couch getting stoned all day you’re so fucking wrong. I’d like to see weed get legalised everywhere.”

HAVE YOU EVER EMBARRASSED YOURSELF IN FRONT OF ONE OF YOUR HEROES?

“I’d like to answer that question with some funny anecdote, but no. I’ve always been too wary of doing something like that. I’ve never lost that fan perspective, though, and I get so many opportunities to meet cool musicians. That’s one of the many reasons why I love what I do.”

ARE THERE ANY MUSICIANS AROUND AT THE MOMENT THAT YOU’D LIKE TO WORK WITH?

“You know who I really fucking like? The singer from Cage The Elephant [Matthew Shultz]. That dude’s got fucking style and charisma. I’d love to do something with him. I’ve worked with Nikki Sixx and Phil Anselmo, and all sorts of dudes, but that would be a good one for sure. I love sitting round and having drinks with [Marilyn] Manson as well.”

WAIT, YOU HANG WITH MANSON?!

“The times that I’ve been backstage or at award shows with him have been great! There’s just something about that cat. I’d love to do something ultra heavy with him. Nothing like what he’s doing now. Nothing like I’m doing now, either. I’d want it to be extremely fucking dark and heavy.”

WHO’S THE SHITTEST BAND FROM THE NU METAL ERA?

“Are you asking me to call out a band and tell them that they’re shit? Ha ha! I can’t do it. I’ve got to be a gentleman. Let me just say this: after the core group of bands – Coal Chamber, Korn, Deftones, Static-X and later System Of A Down and Slipknot – broke the scene, a few bands came along that are fucking huge now, and they’re just terrible for me. I can’t understand for the life of me how they sell records, or how anybody who listens to them can take the music or the personalities in the bands as authentic.”

FINALLY, DO YOU BELIEVE IN THE DEVIL?

“Absolutely not. I think God and the Devil are man-made myths meant to enslave. I believe in karma. I believe in the light and the dark. I believe you need to wake up every single day and say, ‘Thank you.’ I believe in the power of prayer, but not to any organised religion’s god. How can I help people? What can I say to bring forth positivity? Those are all questions that are important to me. My mantra is positivity, and I want my music to be empowering.”

DEVILDRIVER’S NEW RECORD, TRUST NO ONE, IS OUT NOW VIA NAPALM