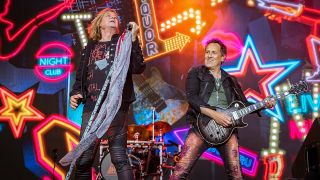 The band have now released a video diary from after the final show, where they talk about the experience, with frontman Joe Elliott not only revealing they recorded the final two shows for a future release, but also saying he’d like to do it again at some point in the future.

Elliott says: “Twelve shows completed, filmed the last two and it was amazing. It was great and has been an absolute blast. I want to do this again – not right away, but one day down the road. I can see this in my future.”

Guitarist Phil Collen adds: “It was fantastic – we’d do this again. We actually loved it. It’s great doing something that’s different to what you normally do after 40 years. I think this was the best we’ve ever been.”

In June this year, Campbell said it was possible that Def Leppard could release new material in 2020, while the band also recently released the second volume in their career-spanning box set series which brought together 1992's Adrenalize, 1993's Retro Active, 1996’s Slang, 1999’s Euphoria along with rare cuts, b-sides and more.