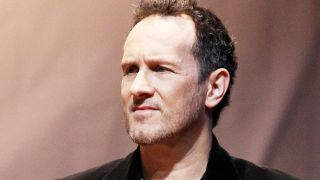 Def Leppard guitarist Vivian Campbell’s upcoming cancer surgery will keep him in “lockdown” until the end of the year, frontman Joe Elliott has confirmed.

Campbell is due to undergo stem-cell procedure after his Hodgkin’s lymphoma returned – despite doctors giving him the all-clear.

Elliott tells 92 Minutes Of Hair: “Vivian, for the second time, is now in remission. The first time, we were told he was in remission. And he was, but it didn’t take. It didn’t stay. It came back.

“This time, through clever management with his doctors, they were able to monitor him through the whole tour with Kiss this summer. And as we speak, he’s getting ready to go in to have stem-cell surgery, which will hopefully get rid of this thing once and for all.

“Up until Christmas, he’s going to out of action – once they start on this, they have to keep him so locked down and away from germs and stuff. Anybody visiting him has to put on one of those nuclear suits. He’ll be locked away; he’ll be the boy in the bubble.

“But he’s very confident that he can do this, and his spirits are great.”

Campbell’s upcoming medical procedure means Def Lep recorded much of his contribution to their next album during their summer tour. Elliott tells KFAB: “We did a bit of stuff on the road, because he’s going be unavailable, which means that any work that he needs to do on the record, we had to make sure it was done before.

“We had him in a hotel room with his guitar and a microphone, ready to do backing vocals and guitar solos and all sorts of mad stuff.”

The singer says they aim to complete the follow-up to 2008’s Songs From The Sparkle Lounge by January, with a tentative release date of April or May.