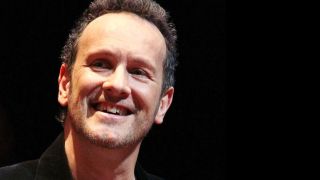 He was given a provisional all-clear after undergoing chemotherapy for Hodgkin’s lymphoma last year – but it’s come back.

Campbell tells HeraldExtra.com: “The remission was a little bit premature. It came right back. I don’t know if the cancer came back or it never totally went away, but the initial scan I did after my chemo came back clean.

“There was something about it the oncologist wasn’t clear about so I was referred to another specialist. Everyone was a bit apprehensive and he said, ‘Well, for now you appear to be in remission.’ I kind of took that ball and ran with it – and unfortunately it turned out to be premature.”

A later scan revealed new cancer cells had grown back, and he’s now half-way through a new form of chemotherapy.

“It’s really kind of easy-going,” says Campbell. “It’s the first new drug that’s been discovered for Hodgkin’s since 1977. I’m part of this research trial. I don’t know how it works but somehow or other it just manages to target the cancer cells.

“It’s not like old-school carpet-bomb chemo where it kills all the fast-growing cells, so I haven’t experienced any hair loss or any issues with my skin or nails this time around.”

His treatment will continue during Def Lep’s summer tour before he receives a stem-cell transplant, probably in September. He admits he’s not looking forward to it but adds: “I’ve been told if I don’t do that, the cancer’s going to keep coming back every couple of years, and every time it’s a little bit more resistant.”

Meanwhile, he’s delighted to have the opportunity to keep working. “When I was going through the chemo last year the band said, ‘We’ve been offered these shows; can you do them? We can get someone to cover for you.’ I said, ‘Fuck that! I’m not having someone else do my job.’

“It was very, vert therapeutic for me to get on stage and do that. The same is true this year.”