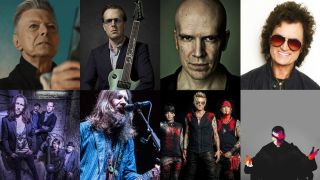 Last week’s winner – in our round-up of the great and good in new rock’n’roll – was Tommy Hale, followed by As Lions in second place and Testament in third. But who will triumph this time? Have a listen, ingest, then cast your vote at the foot of this page. Enjoy!

As tragic as Bowie’s passing was, you can’t deny he went out on a bold creative high. One of his final trio of recordings, Killing A Little Time – sung here with panache by Michael C. Hall – is evidence of the compelling, innovative sounds Bowie had in him in those final days. The musical landscape is a poorer place without him.

It’s bluesy, it’s a classic, so naturally Joe Bonamassa – the 21st century’s Lord Of The Blues and man-with-way-too-many-guitars-for-his-own-good – has covered it. And what a good job he did too, suit-free (unusually) and relatively chilled at this smaller, sweaty gig.

There’s no farting around with alien puppets here: just Devin’s colossal-sounding hybrid of new age, metal and emotional drive. With a video that falls somewhere between The Day After Tomorrow and Michael Jackson’s Earth Song (but ultimately more optimistic) Stormbending soars to MoneySupermarket levels of EPIC feelings. Stirring stuff.

There’s ample life in the Voice Of Rock yet, as this fresh cut from Hughes’ new album Resonate confirms. The title might hint at Christian singalongs, but that groovy, beefed up riff belongs to the Devil – in a very good way.

The brainchild of former Little Angels man (and BIMM founder) Bruce Dickinson, Colour Of Noise streamline old-school roots into sharp, contemporary rock songs. And on Medicine Man, complete with trippy video, they throw a tonne of pills into the equation to cool effect.

The Atlanta fivesome keep putting videos out there, but they just keep being darn good – and who are we to deny you the good stuff? Sunrise In Texas – a prettily pensive slice of the South – has been a popular live number for a while, and now you can enjoy it here; and as part of tasty new album Like An Arrow.

No, Nikki Sixx will NOT go quietly, as this chest-thumping taste of his post-Motley Crue life suggests. Part bro-rock anthem, part alt metal mayhem – with a first-rate screamer of a guitar solo – We Will Not Go Quietly is a song with which to stick it to The Man, or anyone who’s giving you grief today.

“It’s a pretty perfect balance of obnoxiousness, ridiculousness, intensity and theatrics, and somewhere within that spectrum is where our music sits too,” says vocalist Matt Baty, who sounds a bit like a young, stoner Lemmy. It’s not a bad summary either – mental, porcine band name aside, Pigs Pigs Pigs Pigs Pigs Pigs Pigs make a surprisingly commanding racket on Sweet Relief. Mmmm fuzzy…