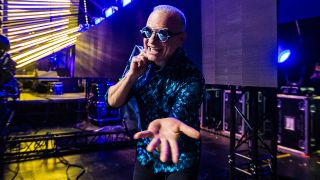 David Lee Roth opened his Las Vegas residency at the city’s House Of Blues on Wednesday evening with a setlist crammed with classic tracks from both his solo career and his time with Van Halen.

Diamond Dave’s performance was the first of nine planned shows in Sin City, and he wasted no time by launching into a cover of the Kinks' You Really Got Me which also appeared on Van Halen’s self-titled debut album in 1978.

Roth then powered through a further 12 tracks including fan favourites Panama, Ain’t Talkin’ ‘Bout Love, California Girls, Just Like Paradise and Tobacco Road, before delivering two encores in the shape of Just A Gigolo and 1984 classic Jump.

Fan-filmed footage from the show has now appeared online and can be watched below, where you'll also find the full setlist.

Speaking about the residency, Roth said: “A weekend with me is interactive way beyond just music. It starts with the best food on Earth. The fellas smoke their three cigarettes for the year and we all stay up way past our bedtime!”

In addition to his Las Vegas shows, Roth will support Kiss on the next leg of their End Of The Road tour across North America, which will get under way at the SNHU Arena in Manchester, New Hampshire, on February 1.