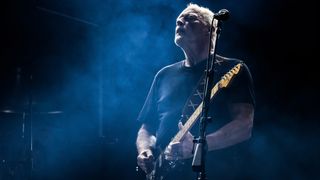 The film sees Gilmour return to the legendary historic site of the ancient Roman amphitheatre 45 years after he performed there with Pink Floyd for Adrian Maben’s now iconic film Pink Floyd Live At Pompeii. In doing so, Gilmour became the first ever rock musician to perform at the venue to a live audience (Pink Floyd legendarily performed in an empty amphitheatre in the 1972 documentary).

David Gilmour Live At Pompeii has been compiled from Gilmour’s two shows at the venue on July 7 and 8 last year and will feature tracks from Gilmour’s last two solo albums, On An Island (2006) and Rattle That Lock (2015) as well as Pink Floyd’s classics such as Comfortably Numb, Wish You Were Here, One Of These Days and the rarely heard Great Gig In The Sky. It has been directed by Gavin Elder and filmed in 4K, to be presented in Dolby Atmos sound.

Tickets are now on sale worldwide with more cinemas to follow soon, including Latin America and Central America. Via ‘Demand It’ if David Gilmour Live at Pompeii is not screening in a specific area, fans can make a request for it by filling out a form on the website, and Trafalgar Releasing will do their best to bring the event to a cinema near them. For details of cinemas taking part in this very special one night only event and ticket information visit http://www.davidgilmourcinematickets.com/.