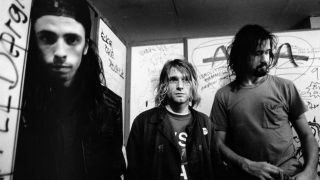 The film focuses on producer Butch Vig’s punk studio which eventually morphed into a major-label recording hub with the explosion of grunge in the early 90s.

In the short clip premiered by Pitchfork, Grohl briefly chats about Nirvana’s early Nevermind demos which were cut at the Seattle venue between April 2-6, 1990, under the watchful eye of Vig.

He says: “When I joined the band, they had this demo that sounded amazing – it sounded huge. It sounded different than the things they had done before. Everyone talked about Butch.”

Other artists to feature in the documentary include Garbage’s Shirley Manson and Billy Corgan and Jimmy Chamberlin from Smashing Pumpkins.

Corgan says in the film: “Very much part of Butch’s story was that rock’n’roll had sort of passed them by. They start this little studio, and they’re just gonna make their little indie records and sort of ride off into the sunset and have their beers. Next thing you know…”

The Smart Studios Story is currently showing at theatres across the US, and has been released as the official film of Record Store Day which takes place on November 25.

Buyer's Guide: How to buy the best of Sub Pop