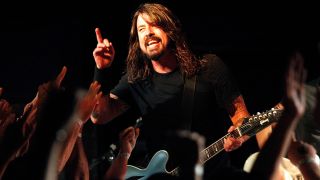 Foo Fighters mainman Dave Grohl has ruled out making another album the way they made Sonic Highways – but he believes other bands could follow their lead.

The Foos recorded each track of their eighth album in a different US city, and documented the process for a TV series.

Grohl tells NME: “I’m never fucking doing it again! But I can imagine there are bands from all over the world who could do the same thing. England’s a great example of a country where each city has regional relevance.

“I think every country could have its own Sonic Highways.”

He’s already set his sights on the follow-up, saying recently: “That’s some fucked-up shit. I already know what we’re doing for that, and it makes this look like fucking kindergarten.”

Drummer Taylor Hawkins describes the latest record, out today, as the best they could possibly have made. He adds: “We like the way our band sounds, naturally. We kept it as humanly perfect as possible, but nothing more. It’s as perfect as we can be – which is not perfect.”

Meanwhile, the Foos are new favourites to headline Glastonbury next year. They’re 8⁄11 favourites with bookies William Hill, with Fleetwood Mac at 6⁄4, AC/DC at 6⁄1 and Led Zeppelin at 16⁄1. Further down the odds are Pink Floyd, David Bowie, Iron Maiden and U2.