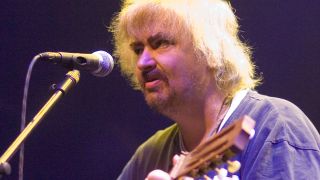 Cult songwriter, musician and artist, Daniel Johnston has died at the age of 58.

The news was confirmed by his former manager Jeff Tartakov to The Austin Chronicle, who report the influential underground artist died after suffering a suspected heart attack.

A statement from Johnston’s family reads: “The Johnston family is deeply saddened to announce the death of their brother, Daniel Johnston. He passed away from natural causes this morning at his home outside of Houston, Texas.

“Daniel was a singer, songwriter, an artist and a friend to all. Although he struggled with mental health issues for much of his adult life, Daniel triumphed over his illness through his prolific output of art and songs.

“He inspired countless fans, artists, and songwriters with his message that no matter how dark the day, ‘the sun shines down on me’ and 'true love will find you in the end.'"

Johnston was born in California in 1961 and grew up in West Virginia, but became known in the music scene after moving to Austin, Texas, in the early 80s after handing out tapes of his work in the street.

He released his first cassette Songs Of Pain in 1981 and launched arguably his most popular recording Hi, How Are You in 1983. He was snapped up by Atlantic Records for his 1994 major label debut Fun, which was produced by Butthole Surfers guitarist Paul Leary.

Johnston, who spent time in psychiatric institutions and was later diagnosed with schizophrenia and bipolar disorder, continued to record and released his final album Space Ducks in 2012. However, his health began to deteriorate in recent years, with his sister Margy telling The Austin Chronicle that he had been hospitalised in 2018.

Johnston’s work was championed by artists including The Flaming Lips, Tom Wait, Beck and Kurt Cobain, who famously wore a Johnston designed t-shirt to the MTV Video Music Awards with Nirvana in 1992.

His friend and producer Brian Beattie tells The Austin Chronicle: “When we heard those tapes, Hi, How Are You and all those, there wasn’t any other music from my age group where it was so absolutely personal.

“The things he was singing about, it was almost voyeuristic to hear it. So, he really cracked open the kind of emotions you don’t understand yet. He was all about those emotions. He understood not understanding them.

“To me, there was something about the way he was only being himself and, at the same time, he was completely formed by the larger world, yet he was so uniquely private in that weird way that he was.”

Tributes to Johnston from the world of music, TV and film have been posted on social media, with Zola Jesus saying: “There are not enough words I can say about the important and vitality of Daniel Johnston’s musical spirit. He was a huge inspiration to me, to follow my creative impulses no matter how messy or simple. RIP.”

Find some of the tributes below.

there are not enough words i can say about the important and vitality of daniel johnston’s musical spirit. he was a huge inspiration to me, to follow my creative impulses no matter how messy or simple. RIP.September 11, 2019

Those early DJ tunes meant a lot to so many of us. “Walking the Cow” was also a favorite of mine, along with “Keep Punching Joe,” whose lyrics reference “Walking the Cow.” Rest well Daniel Johnston, you sure earned it. https://t.co/KVGvW210yBSeptember 11, 2019

This is a beautiful song by Daniel Johnston, which my friend Doug Stone introduced me to. https://t.co/TGX433X1TZ via @YouTubeSeptember 11, 2019