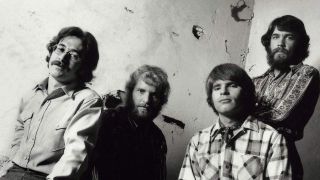 Creedence Clearwater Revival have announced the details of a seven album vinyl box set to celebrate their 50th anniversary. It's released on November 30.

And it looks like they're doing it properly, with each original Fantasy album remastered at half-speed at Abbey Road.

"I’ve tried to be as authentic as I could, and just make it sound like music," says Abbey Road engineer Miles Showell. "Not over-hyped, not over-processed. Up until now a lot of processing has been done on these recordings, so my approach was to strip them right back and just expose them for what they are — because what they are is great music.”

The albums come housed in tip-on sleeves and are accompanied by an 80-page book featuring liner notes from Los Angeles-based music journalist Roy Trakin, plus photographs from the Creedence photo archive.

Because box sets are something Creedence haven't been very good at doing.

In 1987 Fantasy released a 10-CD set containing the studio albums, a live album and two entirely redundant compilations, with a set of sleeve notes badly translated from German. In 2001 an otherwise decent six-CD box arrived which divided the band’s history up into unnecessarily distinct periods for no apparent reason whatsoever. And two years later, the same collection was released on vinyl using exactly the same artwork.

In 2009, the band’s 40th anniversary was celebrated with a seven-CD set that at least pretended to try, even if the cover looked like a crayon drawing reluctantly displayed by the parents of a difficult child.

2013 saw a CD box set that included a some sparse sleeve notes but spelled the band's name wrong on the spine, while the following year a nice set of vinyl replicas arrived in a plain blue box that neglected to include any sleeve notes at all.

For the the 50th anniversary, it looks like Creedence fans are finally getting what they deserve.

In June, the band released the first official video for their anti-war anthem Fortunate Son.

John Fogerty plays at London Blues Fest on October 25, with support from Steve Miller. Tickets are on sale now.