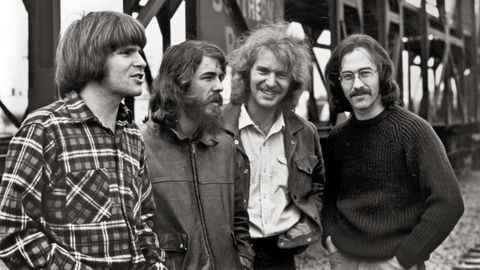 Hot streaks make careers. Take the Beach Boys: without the extraordinary 14 months between July 1965, when work started on Pet Sounds, and September 1966, when Good Vibrations was completed, the otherwise shambling Brian Wilson wouldn’t be celebrated with the unquestioning affection he is today. Or The Kinks, with a run of 14 flawless hits in four years from 1964 building a reputation that hasn’t been seriously damaged by a subsequent 46 marked largely by mediocrity and bickering.

For Creedence Clearwater Revival, the hot streak began in July 1968 with their debut album, and ended a little over two years later with their sixth, Pendulum. It’s an astonishingly fecund run by any standards.

This box brings those six – plus 1972’s Mardis Gras – together in one package, but we’ve been here before. In 1987 Fantasy released a 10-CD set containing the studio albums, a live album and two superfluous compilations, with a set of badly translated sleevenotes. In 2001 an otherwise decent six-CD box arrived which divided the band’s history up into entirely unnecessarily distinct periods.

Two years later, in a spectacular feat of will-this-do?-ism, the albums were released on vinyl using exactly the same artwork. And in 2009 the band’s 40th anniversary was celebrated with a seven-CD set that at least made an effort, even if the cover looked like a potato print proudly brought home from school by a troubled six-year-old. /o:p

In the age of the deluxe, forensically curated compendium, The Complete Studio Albums is another disappointment. The original blue Fantasy labels are in place, but there’s no sleevenotes, no booklet, no set of limited-edition art prints, no phial of authentic bayou water. Worse, Pendulum isn’t the gatefold version adorned by Baron Wolman’s spectacular 1970 image of a triumphant John Fogerty at the Oakland Coliseum, which is a bit like reissuing The Clash’s London Calling and neglecting to include Pennie Smith’s iconic cover shot of Paul Simonon trashing his bass.

In late 1967, John Fogerty had assumed control of the band – then called The Golliwogs – from his brother Tom. He ditched the unfortunate name, started writing songs on his own, and CCR’s debut album appeared halfway through the following year. It’s a mixed bag, featuring three cover versions, two Golliwogs tracks and four originals.

It’s the covers that showed the way. A delicious version of Wilson Pickett’s Ninety-Nine And A Half (Won’t Do) showed that John Fogerty had a voice as soulful as any of the Stax stars he adored; the band’s version of Screaming’ Jay Hawkins’s I Put A Spell On You dumped the gurning slapstick of the original and turned it into an aching ballad, while a drawn-out shuffle through Dale Hawkins’s Suzie Q created a template the band would revisit throughout their career.

If the songwriting was tentative on album number one, by the time Bayou Country arrived in January 1969 Fogerty was on top of his game. The first of four albums released during a year in which the band outsold The Beatles, it’s a classic. So were the three that followed in March (March!), August and November. Green River, Bad Moon Rising and Willy And The Poor Boys are peak Creedence, spawning a slew of classic singles including Proud Mary, Born On The Bayou, Lodi, Commotion, Down On The Corner and Fortunate Son.

Cosmo’s Factory arrived in July 1970, launching another six hits. And, at the end of the year, Pendulum landed. It wasn’t their best, but Have You Ever Seen The Rain? would be a career high for almost anyone else. And then it all began to disintegrate. Mardi Gras was made as a trio after Tom Fogerty left, and the final single, Someday Never Comes, just sounded tired.

No one – no one – has ever had a set of tools to equal John Fogerty during his hot streak; a man with a voice as capable of great savagery as it was of heartbreaking tenderness, an incredible guitarist, and a writer of brilliantly catchy, era-defining songs.

It all deserves a little more love than it has received here, but there’s hope: 2015 will see the release of a career-spanning set of Fogerty’s music curated by the man himself. Maybe it will (finally) do the band justice.