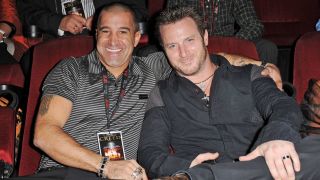 Creed bassist Brian Marshall says he’s spoken to Scott Stapp, and believes the troubled singer needs an intervention before he does himself serious injury.

Stapp last week posted a video in which he claimed he was the victim of a concentrated attack, he’d had his bank account frozen and he was living in his truck. It was later revealed his wife had cited his drug use, violent behaviour and a suicide attempt in her divorce papers, and that she’d attempted to have him put into medical care following months of disturbing behaviour.

Stapp, who later removed his video statement, then launched a crowdfunding campaign for $480,000, saying it would pay for a solo album and a novel. It’s also been taken down.

Last week Marshall reported that he’d spoken to his colleague and “he seems to be okay.” Now he’s said: “Due to the exposure my post has received I feel I need to clarify what I meant.

“It’s obvious that Scott is not okay. He needs medical help and/or an intervention so he does not surrender to this disease before he hurts himself or others.

“I was trying to inform those who were concerned about his immediate wellbeing, that we were reaching out to him during this difficult time and will continue to do so until the family gets the help they need.”