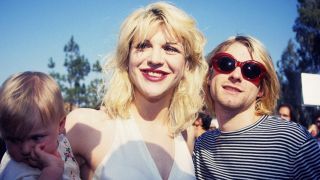 While daughter Frances Bean Cobain served as the project’s executive producer, the Nirvana frontman’s widow had no editorial input but did provide Morgen with access to her personal archives as a way of providing material and support for the first fully-authorised Cobain film.

Montage Of Heck – which includes unreleased songs by the Nirvana leader – had its world premiere at last month’s Sundance Film Festival and just debuted at the 65th annual Berlin International Film Festival. It will see a UK release in April and US television premiere on cable network HBO on May 4.

Love shared her reaction to seeing the film during an appearance on The Late Show With David Letterman.

Love says: “I just came back from Berlin. It’s anguish. It’s very moving. I’ve seen it now three times, and I’m probably not going to see it again. It’s too much. People were in tears.

“The director, Brett Morgen, did a fantastic job on it. I trusted him completely and gave him the keys to my storage and said ‘tell the truth.’”

Morgen warned Cobain’s mother about some potentially difficult scenes before he let her see the film, including intimate video of her son with Love, and footage of Cobain where he appears to be high on heroin.

Love is planning to start filming her own biopic on her late husband this year.