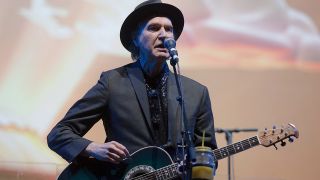 Ray Davies has hinted that a new Kinks album with his brother Dave and drummer Mick Avory could be on the cards.

Speculation about a possible reunion has been thought more likely in recent years after frontman Ray made a guest appearance at guitarist Dave’s solo show in December 2015, performing the classic track You Really Got Me.

The pair had previously ended their two-decade feud by meeting and playing music together in 2014.

Original bassist Pete Quaife died in 2010, making a complete reunion impossible, but  in a new interview with Channel 4, Ray reports that he’s working on bringing his brother and Avory together again – despite the pair’s strained relationship.

Davies begins the interview by picking up his phone and says: “Mick, I’ll see you at the pub later.”

When questioned if they’re definitely meeting up, Davies responds: “Yeah, making a new Kinks album – inspired by the Rolling Stones.”

Pressed further, Davies responds: “We’re talking about it because I’ve got all these songs I wrote for them and then the band… not broke up, we parted company. I think it’s kind of an appropriate time to do it.”

And asked to confirm if the band is getting back together, Davies says: “Officially we are… yes, in the pub later on. It won’t be well organised like the Rolling Stones. I must praise them for being great at publicity. A great band and Mick’s done an incredible PR job. It’s inspiring to see them doing it, but the Kinks will probably play in the local bar.”

Davies adds: “The trouble is, the two remaining members, my brother Dave and Mick never really got along very well. But I made that work in the studio – it fired me up to make them play harder and with fire.

"So if I can recapture those moments… I’ve got some great Kinks tunes in my head.”

Davies says he’s spoken to them both separately, but hasn’t brought them together in the same room yet, but adds: “We’re working on it.”