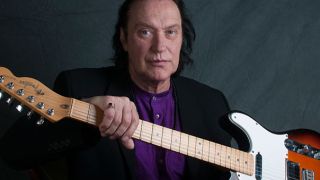 Kinks guitarist Dave Davies has told how he and estranged brother Ray recently played music together – and their private reunion was more important than any public event could be.

The siblings have both recently spoken positively about the chances of hitting the stage together to mark the band’s 50th anniversary.

But Dave – who next week plays his first hometown concert in 13 years – is more concerned about coming to terms with the “toxic” relationship he has with his elder brother.

He tells the Independent: “It’s like some people prefer me and Ray to be at each other’s throats than to be brothers. In my 30s and 40s I resented the fact that Ray gave me so little credit for my input and creativity. But my love has always been relentlessly directed towards him.”

He continues: “The older I get, the more difficult I find it being around Ray. I don’t want to use the word ‘abuse’ – but I feel my energy seeping away from me sometimes if I’m with him.

“I might be sitting in the room, feeling perfectly happy, and I start to feel really tired, and wonder why. I think, ‘Oh, I’ve got to get out.’ It’s always been a part of his great talent that he’s been able to extract elements of people’s characters and energy; so I have to limit the time I spend with him.”

He’s able to see a positive side to the tension and violence that became a trademark of The Kinks’ career. “Families are difficult, and you can learn from discomfort,” he reflects. “Ray and I have been each other’s most important teachers – maybe that’s the clue to the whole relationship.”

No anniversary reunion has been confirmed. But Dave already feels there was a great deal of personal achievement when he visited Ray at home two months ago to discuss the possibility, and the pair wound up working on new music.

“Just ideas,” says the guitarist. “Maybe we don’t have time to resolve them. Maybe it’s not important for it all to be fixed between me and Ray. Maybe the dynamic of why it works is the tension, and the energy that comes from it. It did work when we played, for a bit.”

Asked if he thinks a reunion could take place in some form, he replies: “Yeah. It’ll be great, I think.”