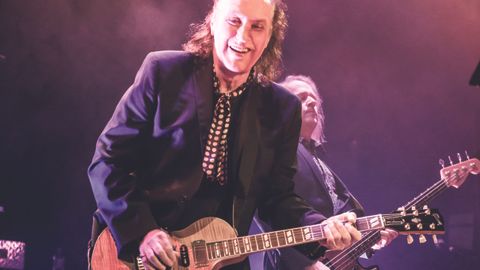 KINKS FANS AWAITING the longed for or dreaded reunion (depending on how you feel about heritage comebacks) have the option of seeing Ray Davies solo, The Kast Off Kinks or the Sunny Afternoon musical. While it might fulfil sentimental fantasies for some, a tour by the three survivors is hardly necessary to keep the Kinks name in the spotlight.

Not to be left out, Dave Davies, now based in LA, is back with another solo album and homecoming show. He previously surfaced in 2014 at the Barbican but the Islington Assembly Hall, former scene of tea dances and variety shows, is more in keeping with The Kinks’ old-time glory.

The crowd is smaller than might be expected for one of our bedrock groups, but the guitarist’s jokey, infectious rapport helps distract from his flu-afflicted voice, which holds up better on some songs than others. More than once, he begins a number then starts clapping above his head to let the crowd take over. Where Have All The Good Times Gone remains unbearably poignant, while a rowdy Dead End Street is bellowed back at him by fans (although at £35 a head, they’re hardly cash-strapped victims of Cameron’s austerity Britain).

A jolly-but-patchy gig is then transformed into a rock’n’roll happening by the unexpected arrival of Ray Davies, still in his coat and cap, to an earsplitting whoop of disbelief from the faithful. The simmering sibling rivalry is never far away – Ray points to his brother and says, “Let’s hear it for Dave Death Of A Clown Davies” – but it doesn’t detract from the joy of seeing the pair rattle through You Really Got Me as if 50 years were the blink of an eye.

By the time we get over the shock of what’s just happened, this final song is all over – but a double dose of Kinks spirit is most definitely better than a single, whatever the season.