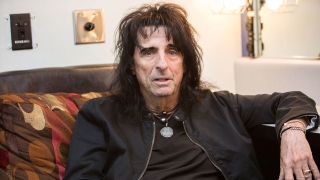 Alice Cooper says he’s gathered a “who’s who” of star guests on his upcoming covers album.

The original shock rocker is working on the record, which will feature versions of hits by The Who, The Doors, Jimi Hendrix and John Lennon – as well as a number of new tracks penned by Cooper. He describes it as a tribute to his “dead, drunk friends.”

Produced by Bob Ezrin, the album has not yet been given a release date, but Cooper suggests it could be out sometime around September of this year.

He tells Eddie Trunk (via Blabbermouth): “I can’t tell you who’s on what right now, because it’s not gonna be released yet, but it’s the ‘who’s who’ of everything. It was one of those things where, at one point, I’m looking around in the studio and I’m going, ‘Holy crap! Look who’s in the studio.’

“The record’s in the can, ready to go. Ezrin did the whole thing. And we’re even now starting to write for the next album, after that. So we’re way ahead of the game right now. I would say it’s probably gonna be out in September — something like that.”

Cooper is currently on the road with Motley Crue as part of their final tour. He has offered to “kill” Crue after their last gig as a way of marking their live retirement.