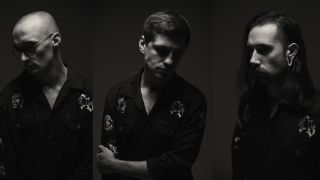 UK post-rockers Coldbones released their new album The Cataclysm last week.  A concept album described by the band as “a fatalist portrait”, with each of the album’s ten tracks serving as interconnecting piece of a larger picture that offers the listener nothing less than a front-row seat to the end of the world. The album is split into two parts, titled The Flooding Of The World and The Burning Of The Earth.

The Cataclysm features striking artwork to convey the prophetic nature of the album's contents from Alice Urbino.

"This is the second album cover I've done for Coldbones, they threw me some support when I was young and still figuring things out, so it's nice to be remembered and continue to make art for the new album," says Alice. "I appreciate them coming to me both times with clear visions of what they want. For The Cataclysm I tried to reflect the music by painting a brutal post-apocalyptic landscape that while being hostile, empty and destructive could also be seen as sombre and beautiful."

Adding to the visual impact, tattoo artist Dan Frye has created a unique icon for each of the album's nine tracks. "These symbols are a mix of my bold drawing style and classic iconography," he says."Heavily inspired by religious and Russian prison art. It was very important to have every design be simple and readable so you know exactly what it is, and hopefully add some visual to each track on the album."

The Flooding Of The World

The opening track of the album introduces the new synth element that we have used throughout the album. We felt we could explore so many new directions with the expansive nature of synth and decided to use the first track to highlight what is to come throughout the rest of the album. We intended the song to start more light hearted and innocent, to then have a swift change, illustrating the realisation of the devastation to come.

Our first single Collapse was by far the most collaborative song in terms of songwriting between the three of us on the album. The initial intention of the song was to be a heavier, riff based track that would get our fans nodding their heads, and encourage the audience to become more animated. It’s a style we haven’t explored before, but it came very comfortably to us due to our shared love of metal music while growing up.

Collectively, it was all our favourite track once we had finished writing the album, and still stands as the song we are most looking forward to playing live.

The narrative to the video is based on the new direction we have taken. We are portraying the new style through persona’s which are ‘created’ in the video. The ominous character resembles the instigator of the darker, heavier sound, which he embeds into us. The video ends with a hectic, high energy performance, that can be expected when seeing Coldbones live.

One of the more powerful and epic sounding songs off the record. As a follower of two quite dramatic songs, we felt we needed to write a song that captures both the simplicity, yet power of the flood.

When writing Cleanse we definitely felt it had a strong post-rock vibe to it. We were excited to keep this sound in our music, but really wanted to explore new and different ideas to develop the songs. Cleanse is a perfect example of us stepping out of our comfort zone, and taking on the challenge of bringing heavier riffs into the music. One of the more challenging parts of this was to also keep the song feeling like there is a narrative within the post rock/riff combination. We worked closely with Lewis Johns (the producer) on the structure of this song, and he helped us with our confidence in highlighting the riffs rather than hiding them behind more atmospheric parts of the song.

Our first ever acoustic track. It's something we have always been interested to explore. We’ve always held strong to the mantra ‘Serve the song’. And this expanded slightly in regards to ‘serving the album’. We felt a dark and slightly haunting acoustic track would be the perfect end to the first side of the album. It holds melodic tones that are suppose to sadden the listener and ready them for the second part to this concept album. The mysterious fade out at the end of the track highlights the continuation to and uncertain future .

The Burning Of The Earth

The introduction to the second half of the record. A more light-hearted song, but focusing on melody and atmosphere to invoke emotion rather than heaviness. This song was, along with The Flooding Of The World, the first song to be written for the new album. We quickly realised that both songs had similarities, but very much held their own. The themes very quickly fell into place with these songs, and the concept developed from there.

This song, along with its sister track The Flooding Of The World were the two first tracks to be written for the album. We realised both songs had similarities which could then be turned into the two sides of the album which comfortably fit with the concept we were developing at the time.

Ruin is one of the most progressive tracks on the album. It represents the mourning of a world we once knew. It’s somber and atmospheric nature allowed us to explore an additional narrative, which holds a more personal meaning, whilst staying true and becoming one of the more prominent tracks linking with the concept.

We made a conscious decision to add layers to the song as it progressed, representing various stages of grief. Our aim was to draw attention and realisation to the devastation left by the burning of the earth.

Further experimenting with guitar effects, we used a reverse guitar throughout the song to resemble remembering a time before the current reckoned landscape. We wanted the song to build but have a hard hitting sudden drop to resemble being consumed by the reality. The structure of the song is way more simple than a lot of the other tracks on the record, and this was due to the concept at this point in the album being more harsh and to the point.

A calmer, softer approach to the lead to the end of the album. This track signifies the realisation that the devastation has come to an end - the first sense of hope that we have explored since the start of the album. We liked the idea of this sort of track, before a heavier violent end.

This track is a culmination of what has happened over the previous songs. A state of despair. We wanted to end the album with a conclusion that felt worthy of the catastrophic events that occurred in the previous nine songs. We mixed hard hitting, dark ambience with a relevant spoken word poem overlaid on powerful synth and chorus like riffs to try and peak emotions of the listeners for this climactic end to a traumatic, emotional journey shared between us all.