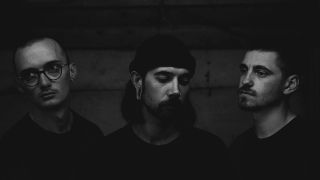 British post rock trio Coldbones have released a  cover of Kate Bush's 1985 classic Running Up That Hill. You can watch the band's new video for the cover in full below.

"When starting our interpretation of this track we had to strip the song right back to its core, the lyrics and the melody," drummer Max Parr tells Prog. "Something that struck us was the line ‘Is there so much hate for the ones we love?’ which is a rather thought provoking idea which lead us to take a rather dark and heavy approach to the track. As an instrumental post rock trio, the opportunity to work and write music to lyrics was incredibly enjoyable.

"We didn’t want this to be a typical cover where we keep every single element the same and just put a load of distortion on it. We wanted to leave our mark. As Kate Bush’s voice is so iconic and important to the song, we wanted to pay tribute to that. Getting the chance to sing on this track was daunting and challenging, but we felt it would serve the song in both it’s original and our newly interpreted state."

"We have a lot of exciting news to announce in the coming weeks and months. We’re taking Coldbones in a darker and more theatrical direction and we can’t wait to share this all with you."

Running Up That Hill is available as a free download from the band's bandcamp page.