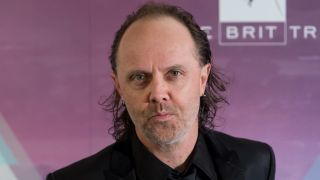 Metallica drummer Lars Ulrich was responsible for turning down the sound of Jason Newsted’s bass on 1988’s …And Justice For All, according to mixing engineer Steve Thompson.

He was behind the desk at Bearsville Studios, New York overseeing the final stages of the album, which has often been criticised for its lack of audible bass.

And Thompson insists that while he was happy with the bass sound when mixing the record, it was Ulrich who wanted it reduced.

He tells Ultimate Guitar: “What I wanted to do and what Lars wanted to do was totally different, which kind of upset me a little bit. I loved Metallica and was very familiar with them.

“I listened to the tracks and said to myself, ‘These sound like ass.’ I chased everybody out of the room and redesigned the drum sound and brought the guitars up. Jason Newsted killed it on bass. Perfect marriage with Hetfield’s guitars.

“Lars comes walking in a couple of minutes later and listens to about a minute of it and goes, ‘Turn that off. What happened to my drum sound?’

“We had to get the drum sound up the way he had it. I wasn’t a fan of it. So now he goes, ‘See the bass guitar?’ and I said, ‘Yeah, great part, man. He killed it.’ Lars said, ‘I want you to bring down the bass where you can barely, audibly hear it in the mix.’ I said, ‘You’re kidding, right?’”

Thompson was so concerned by the move that he called the band’s managers Cliff Burnstein and Peter Mensch that night and threatened to walk away from the project.

He continues: “I said, ‘I love these guys. I think they’re amazing and they’ve created a genre of their own but I do not agree with the direction Lars is pulling me in. My name’s going to go on it so why don’t you find somebody else?’

He was persuaded to stay but Thompson says he regrets not getting the sound the album deserved.

He adds: “My only regret is that we didn’t have enough time to at least mix it the way we heard it. I wanted to take Master Of Puppets and blow that away.

Thompson caught up with Ulrich again when Metallica were inducted into the Rock And Roll Hall Of Fame in 2009 – where Ulrich asked him about the lack of bass on the record – a question which irked the producer.

He recalls: ”I wanted to cold cock him right there. It was a shame because I’m the one getting the shit for the lack of bass.”

Metallica are currently working on the follow-up to 2008’s Death Magnetic, with Ulrich stating they hope to play fresh material at their headline appearances at this year’s Reading and Leeds festivals.