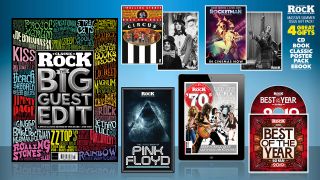 To celebrate the arrival of the Great British Summer, the new issue of Classic Rock is something special. We asked musicians and readers to ‘edit’ the mag and decide which features we should run this month.

Some choices may surprise you – Venom’s Cronos waxing lyrical about Jethro Tull is an eye-opener, Perry Farrell extolling the virtues of Lou Reed perhaps less so.

And if you find yourself sunning yourself on a beach (or perhaps more realistically, sheltering from the rain in the pub) and you need something more to read, we recommend the best books about rock.

The new issue also comes with and a 132-page eBook featuring the legends of the 70s, plus a CD featuring the best tracks of the year so far.

If you buy the magazine from UK newsstands or direct from us online, there's more: a 100-page Pink Floyd book, a giant pair of double-sided posters featuring The Rolling Stones and Elton John, and a 132-page eBook featuring the legends of the 70s.

And there's more! Readers who pick up the new Classic Rock from the larger branches of Tesco or Sainsbury's will also receive a free 148-page Kiss Bookazine (right) that normally retails for £9.99!

Jethro Tull
The story of their sprawling eighth album, and how it was Ian Anderson’s ‘loner’ status and outsider observations that really shaped Minstrel In The Gallery.

Magnum/Avantasia
The bands’ frontmen have a power-metal pow-wow and talk childhood idols, touring with Ozzy Osbourne, conceptual rock operas and living the dream.

Parliament-Funkadelic
They might not get the credit, but they’re as pivotal to rock as Pink Floyd or The Beatles.

Danny Gatton
Still a cult figure outside of the guitar world, Danny Gatton was the ‘player’s player’ who mastered every genre he touched.

Austin Gold
They burst on to our radar with a brilliant debut, after years of paying their dues. Now they’re ready for the next step.

Perry Farrell
In the Classic Rock Interview, the founder of art-rock darlings Jane’s Addiction looks back at a difficult upbringing and living on the edge, and forward with his new project Kind Heaven.

ZZ Top
To celebrate Billy Gibboins and co’s 50 years in rock’n’roll, we asked some top guitarists to pick their top Top track.

Steven Van Zandt
He leads his own band, is in the E Street Band, has a radio show, acts, writes TV scripts… Meet a rock’n’roll Action Man.

Lou Reed
Sometimes in making iconic rock’n’roll, the stories are just as important as the music. We present some of the best from a storytelling master.

Best Of The Year (so far)
We’re only halfway through 2019 and already we’ve heard tonnes of great new rock’n’roll, from old favourites and new faces. We’ve brought you 15 of the best, including The Wildhearts, Tyler Bryant &The Shakedown, Crobot, Eric Gales, Stray Cats, Royal Republic and more…

The Dirt
Geezer Butler talks about life after Black Sabbath, and his new band with rhythm-section partner Matt Sorum, Deadland Ritual; David Gilmour and Robert Plant each launch a new official podcast; Guitarist Of The Year is back – and you can help us find the Class Of 2019… Welcome back The Heavy, Heather Findlay and The Rods… Say hello to The Rising Souls and Novatines… Say goodbye to Roky Erickson, Leon Redbone, Jake Black, Eric Moore…

The Stories Behind The Songs: The Rolling Stones
“I didn’t really understand what it was about, after the event,” its lyricist Mick Jagger says of Let It Loose.

Q&A: Zal Cleminson
In the 70s there was no other gang quite like the aptly named Sensational Alex Harvey Band, with Zal their guitarist.

Six Things You Need To Know About… Ulysses
Just who are these Bath rockers with a palette of sonic colours – and a sense of humour – on their side?

Buyer’s Guide: Procol Harum
They might still be best known for 60s mega-hit A Whiter Shade Of Pale, but there’s much more to them than that.

The Soundtrack Of My Life: Paul Stanley
Kiss’s Starchild on the special records, artists and gigs that are of lasting significance to him.