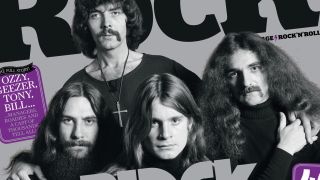 Naked jamming, mountains of coke, knife-wielding fans… This can only be the story of the four Brummie boys known as Black Sabbath – as told in their own words.

Also in this issue…

Blackberry Smoke Beloved by ZZ Top, befriended by Skynyrd, and Gregg Allman reckons they’re “gonna put southern rock back on the map”. We joined the band on the road as they met their adoring British public.

Skip Spence The Moby Grape co-founder wrote his cult solo album Oar in an NYC psychiatric ward after threatening his bandmates with an axe. We tell his tragic tale.

Hipgnosis As one half of the visionary British design teams, Aubrey ‘Po’ Powell changed the face of the album sleeve. Here he digs deep into his archive to reveal previously unseen photos – and the stories that go with them.

The Cadillac Three The shit-kicking southern rockers celebrate their recent Classic Rock Awards victory by drinking the magazine under the table. Cheers!

Jethro Tull In 1977, punk had killed off prog’s old guard, right? Wrong. Ian Anderson and his merrie men were about to record a ‘folk trilogy’ that would give them their greatest success in years.

Thunder: Live At Brooklyn Bowl, London Recorded exclusively for Classic Rock on November 6, 2014. Luke Morley, Thunder’s guitarist/songwriter-in-chief, talks us through this career-spanning CD of live delights, including Backstreet Symphony, Wonder Days, Low Life In High Places, Be Good To Yourself, Up Around The Bend and more…

The Dirt Is there a conspiracy to keep Deep Purple out of the Rock And Roll Hall Of Fame? Fleetwood Mac ready to hit the studio, AC/DC: Malcolm Young’s heart and lung surgery, and Phil Rudd says: “I want my job back and I want my reputation back”… say hello to Pond and Sons Of Bill, welcome back Butch Walker, Revolution Saints and Venom; goodnight Joe Cocker, Jeff Golub, Robert ‘Rock’ Scully…

**The Stories Behind The Songs - XTC **Politically-charged song Making Plans For Nigel firmly established the Swindon band as the intelligent arm of the post-punk movement.

Q&A - Steve Earle The singer-songwriter reveals all about getting divorced, getting older and finally getting the blues.

Buyer’s Guide - John Lennon The Beatle’s solo albums are full of timeless pop, but be prepared for avant-jazz, birdsong and primal screaming too.

**If your newsagent isn’t selling issue 207 of Classic Rock, you can order it online from MyFavouriteMagazines. **